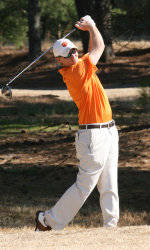 CLEMSON, SC – Jacob Burger fired a career best seven under par 65 on Saturday to lead Clemson to a 283 team score for the second straight day and a first place standing out of 12 teams at the Carpet Classic in Dalton, GA. The Tigers have a two day total of 566, one shot better than Alabama heading into the final round.

Burger had eight birdies and one bogey in shooting his 65, best in the field on Saturday. He stands in third place individually with a seven under par score of 137. He moved from 16th place to third with his performance on Saturday. Burger, a native of Orangeburg, SC, finished both nines in fine fashion as he birdied three of the last four holes on each nine. He had six of his eight birdies on par four holes. He is three shots out of the individual lead entering Sunday’s final round.

Crawford Reeves was Clemson’s second best golfer on Saturday with an even par 72 and stands with a two day total of 146. The highlight of his round came on the 12th hole when he made an eagle three, the first eagle of the year by a Clemson golfer.

David Dannelly, a junior from Easley playing in his first tournament for the Tigers after transferring from Coastal Carolina, had a 73 on Saturday after his opening round 67. His four under par score of 140 is in seventh place in the field of 60 golfers. He led the field with nine birdies in the first round.

Alex Boyd, who was Clemson’s non counter on Friday when he shot a 77, came back strong with a 73 on Saturday and his 150 total stands in 39th place.

McCuen Elmore had a three over par score of 75 on Saturday and his score did not count towards Clemson’s tem score. But, he stands in 18th place individually at 145, one over par. He had a good round going on Saturday as he stood two under par for the day after 11 holes. But, he played the last seven holes at five over par.

The competition will finish on Sunday. Follow the scores on golfstat.com.