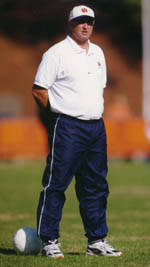 Clemson, SC – The sixth-ranked Clemson men’s soccer team will host Georgia State on Wednesday night at 7:00 at Historic Riggs Field. The Tigers enter Wednesday’s home opener with a 1-1 overall record. The match will be the first of the season for Georgia State. Clemson holds an 18-0 all-time record against Georgia State, including last season’s 3-1 win over the Panthers at Riggs Field on October 11. In the 18 previous meetings, the Tigers have outscored Georgia State 72-11.

After losing 2-1 in overtime to Cal-State Fullerton on Friday in the opening match of the Cal State Fullerton Invitational, the Tigers rebounded to defeat California by a score of 2-1 on Sunday afternoon. After two games, senior Ian Fuller leads the Tigers with two goals and four points. Fuller scored Clemson’s lone goal against Fullerton and the second half tying goal against California. Sophomore Paul Souders scored the winning goal against California. That goal, which came with less than nine minutes left in the match, marked the first of his Clemson career for Souders. In ten years of coaching, Head Coach Trevor Adair has compiled a 117-59-15 (.653) record including an 83-35-10 (.689) at Clemson.

Georgia State opens the 2001 season with seven returning starters from a team that finished 12-9 last season and won the Trans America Athletic Conference Tournament Championship. Head Coach Kerem Deser, who will be in his second year with the Panthers, has a 320-245-26 career record.