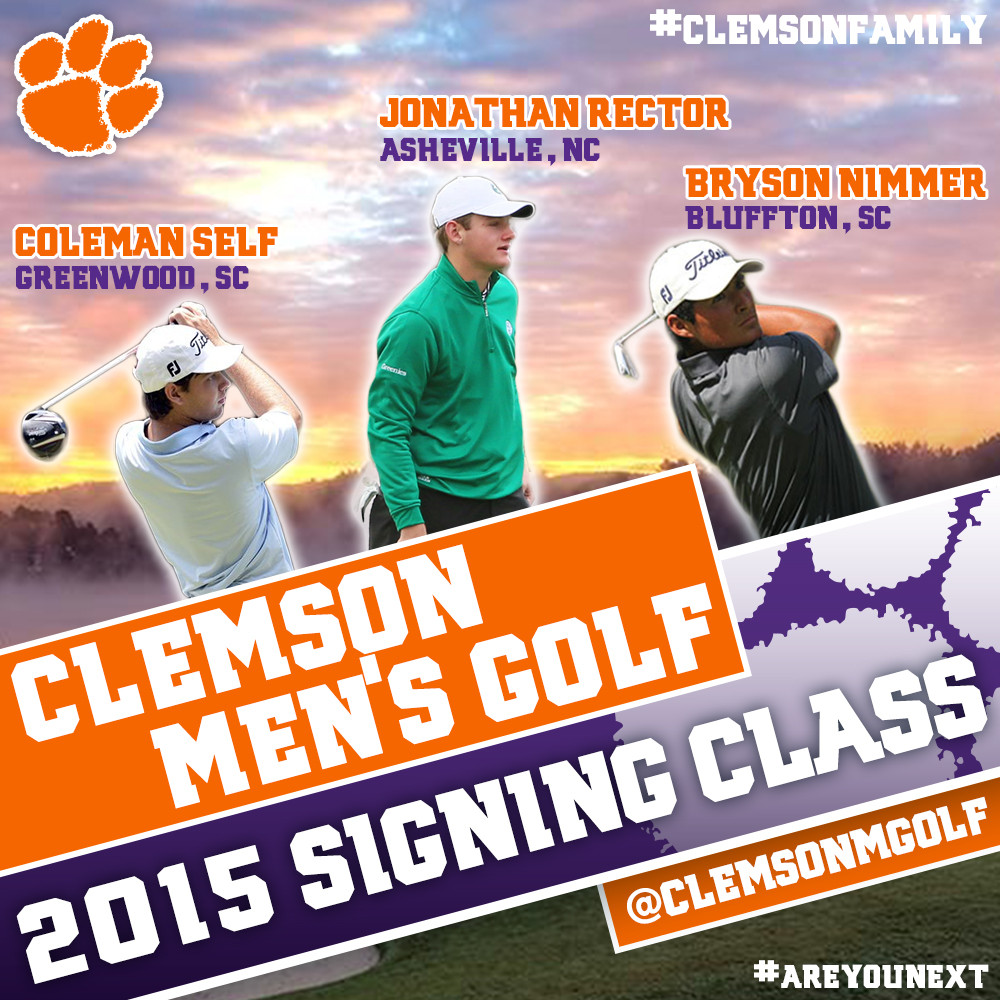 Clemson, S.C.—Clemson Head Coach Larry Penley has announced his signee class for the 2015-16 season.  The Tigers signed three future Clemson Tigers on Wednesday and all are ranked in the top 50 in the nation in the class of 2015  according to the latest Golfweek Junior Rankings.

The three new Tigers are Jonathan Rector of Hendersonville, S.C., Coleman Self of Greenwood, S.C., and Bryson Nimmer of Bluffton, S.C.

“This is the biggest signee class we have had in four years,” said Penley.  “All are very good players who will challenge to start or provide us with strong depth next year.

“Rector and Self have big games when it comes to driving the ball, and Nimmer is the most consistent, and has the best short game player of the three.  We are anxious to have all three join our program.  They are used to playing strong competition and competing for championships.

Rector is ranked #32 in the nation in the class of 2015  by Golfweek, the fourth best player in the state of North Carolina.  He is ranked #50 by Junior Golf Scoreboard and #57 by the Polo AJGA rankings for 2015.

The son of a PGA Professional, Rector won the 2013 Carolinas Dogwood State Junior Championship with rounds  of 73-67-69.  He also posted top 10 finishes that year at the IZOD AJGA Championship and the Joe Cheves Junior Invitational. He finished second at the 2014 AJGA Puerto Rico Open and was seventh at the PGA Junior Series in Columbia.  He helped his high school team to the 3A championship in North Carolina by finishing second.

Nimmer led HiltonHeadChristianAcademy to a state 3A Championship by 30 shots in 2013 and was named to the all-state team.    He won the 2013 Jimmy Self Invitational and captured the Hurricane Junior Golf Tour’s Charleston Junior Open.

In 2014, Nimmer won the IJGA Junior Open with rounds of 67-69-67 and finished second at the AJGA ICOD Championship and was sixth at the SCGA Junior Championship.  He is the number-one golfer in South Carolina according to the SCJGA.

Self comes to Clemson from Greenwood, S.C., the same hometown as former Clemson All-American and current PGA Tour player Ben Martin.  Self  won the 2014 Joe Cheves Junior Invitational when he shot a final round 62, the lowest round in the history of the tournament. He also reached match play at the 2013 US Junior Amateur.  He also had a strong 11th place finish at the 2014 AJGA Davis Love Tournament.