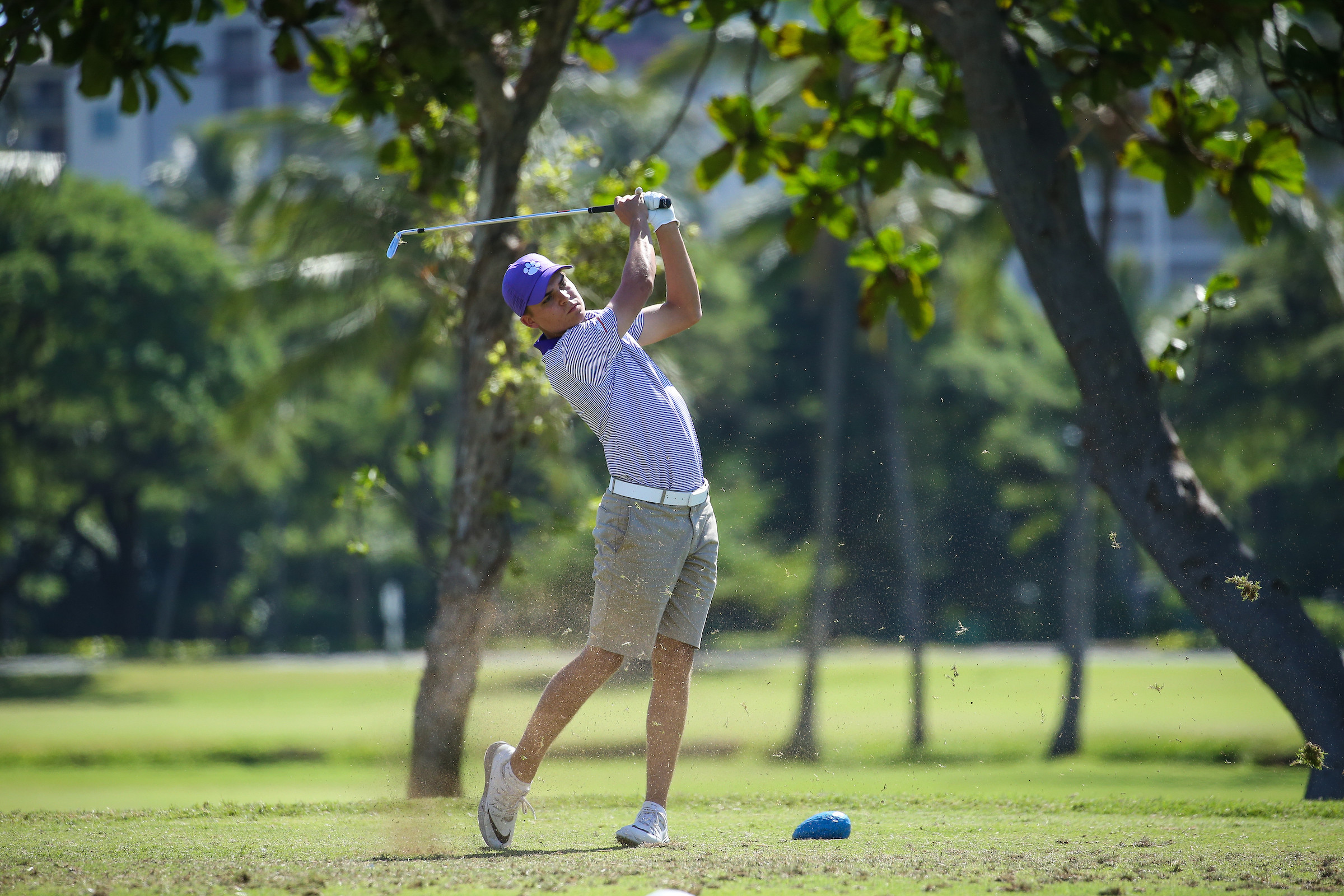 Sugar Grove, Illinois—Clemson made a 28-shot improvement in the second round of the NCAA Men’s National Tournament on Saturday, but still stands in 30th place entering the third round on Sunday. The Tigers must finish in the top 15 after Sunday’s third round to continue in the NCAA Men’s National Championship at Rich Harvest Farms in Sugar Grove, Illinois. Clemson is 20 shots off the cutline entering the third round.

Clemson had an opening round 313 on Friday, the worst score in the field of 30 teams from around the nation.   Clemson’s 28-shot improvement to three-under-par 285 was the best for the Clemson program in NCAA National Tournament play and the biggest improvement from one round to the next in any tournament since October 15, 2011 when Clemson made a 32-shot improvement from round one to round two at the Ridges in Jonesboro, Tenn.

Clemson’s score of 285 on Saturday was better than second-ranked Stanford (287), third-ranked Oklahoma State (287) and fourth-ranked Vanderbilt (288). Clemson’s 285 score was 12th best in the field for the second round.

“We settled down in the second round, but there wasn’t anywhere to go but up,” said Clemson Head Coach Larry Penley in a matter-of-fact manner.   “The biggest improvement we had to make from the first round was to hit the fairway and we did that more often in the second round.

“I was glad to see the guys come back with fight in the second round. I was pleased for Carson (Young) and Austin (Langdale). Austin stayed in his game and had his best round in the NCAA tournament (regional or national).

Young had his best career round in NCAA play with a four-under-par 68 that included six birdies and one double bogey. It was his best round this year since he had a third round 67 on March 26 when he won the Furman Invitational. “Carson hit the fairways and that was one of the reasons he had a 68.   He really played well on a very difficult course. “

Young’s round was the best by a Clemson golfer in an NCAA national tournament since Kyle Stanley had a 68 in the second round at Purdue in 2008. He improved 64 spots in the standings with his 68 after an opening 78

Young was just one of the Tigers who made a dramatic improvement on Saturday. All-ACC sophomore Bryson Nimmer also improved 10 shots from the first round, going from a non-counting 81 to a one-under par 71. The native of Bluffton, S.C. had four birdies and three bogeys. He had just one bogey in his last 10 holes.

Langdale improved from a first round 79 to a second round 73. It was the best round for the senior in postseason play since he suffered a wrist injury at the Clemson Invitational back in April.   He had three birdies, including back-to-back birdies on the second and third holes. He was also the only Clemson golfer to par the difficult par four 17th hole.

Doc Redman, Clemson’s leader in stroke average entering the tournament, had a 73 in the second round after a team best 76 in the first round. Redman had four birdies, including a closing birdie from 15 feet on the ninth hole, his final hole of the round.

William Nottingham, who broke his driver while practicing at the driving range just 20 minutes prior to the start of play in the tournament, had an 81 and was Clemson’s non counter. Nottingham, at 6-4, the tallest golfer in Clemson history, has used a teammate’s driver the first two rounds. He will have a new driver that fits his size in play for the final round on Sunday.

“We are just going to have to play hard tomorrow and do the best we can,” said Penley. “It will be difficult to accomplish (reach the top 15), if the weather is good all day because these teams are talented and I don’t’ see a lot of teams having high scores.”