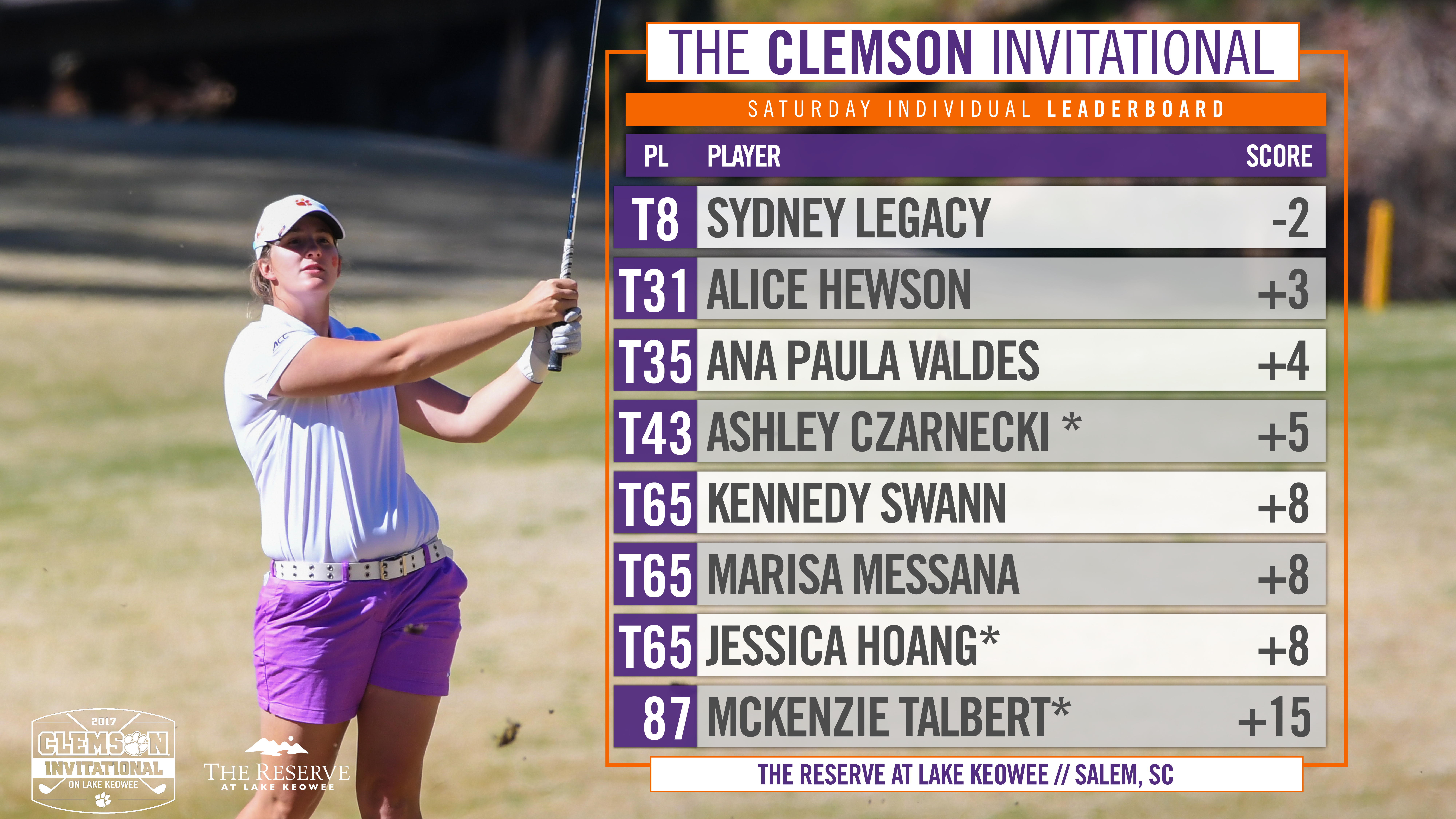 Sunset, S.C.—Sydney Legacy had her second consecutive round of one-under-par 71 to lead Clemson to a 290 team score on Saturday at the Clemson Invitational at The Reserve at Lake Keowee in Sunset, S.C. Clemson stands in a tie for eighth place out of 17 teams in the second annual tournament that will conclude on Sunday.

Play will begin at 8:00 a.m. with teams starting at the the first and 10th tees.

Eighth ranked Furman has a one shot lead over Florida State and Florida in the team competition entering the final round. All three teams are ranked in the top 10 in the nation. The field includes seven top 30 teams.

Furman has a 568 total through 36 holes, eight-under par. Florida and Florida State are at 569 and Texas is at 571. Michigan State is still in the hunt in fifth place with a 575 score through 36 holes.

Florida State had a team tournament record 10 under par score of 278 on Saturday, the lowest team score in the two years of the tournament. A big factor in that total was a tournament seven-under par 65 by Matilda Castren. Sophia Schubert of Texas has a one-shot lead in the individual race over Castren and Alice Chen of Furman.

Clemson made an eight shot improvement in its team score compared to Friday’s round. It was the sixth time in the last seven tournaments Kelley Hester’s team improved by at least three shots from round one to round two.

Legacy stands in a tie for eighth place after 36 holes.   Unranked in the latest Golfstat computer rankings, Legacy is ahead of 20 of the top 100 players in the nation playing in the 94-player field.

Ana Paula Valdes was the most improved Clemson player on Saturday as the freshman from Mexico also shot a one-under-par 71, six shots better than her first round. She had three birdies, two bogeys and 13 pars in a clean round on Saturday. It was her 10th round at par or better this year.

Alice Hewson had a 74 on Saturday after registering three birdies and five bogeys. She stands in 31st place with a 147 total through two rounds.   Kennedy Swann also had a 74 on Saturday, a four-shot improvement over her first round, while Marisa Messana had a 75 after an opening round 77. Messana played the back nine at even par on Saturday.