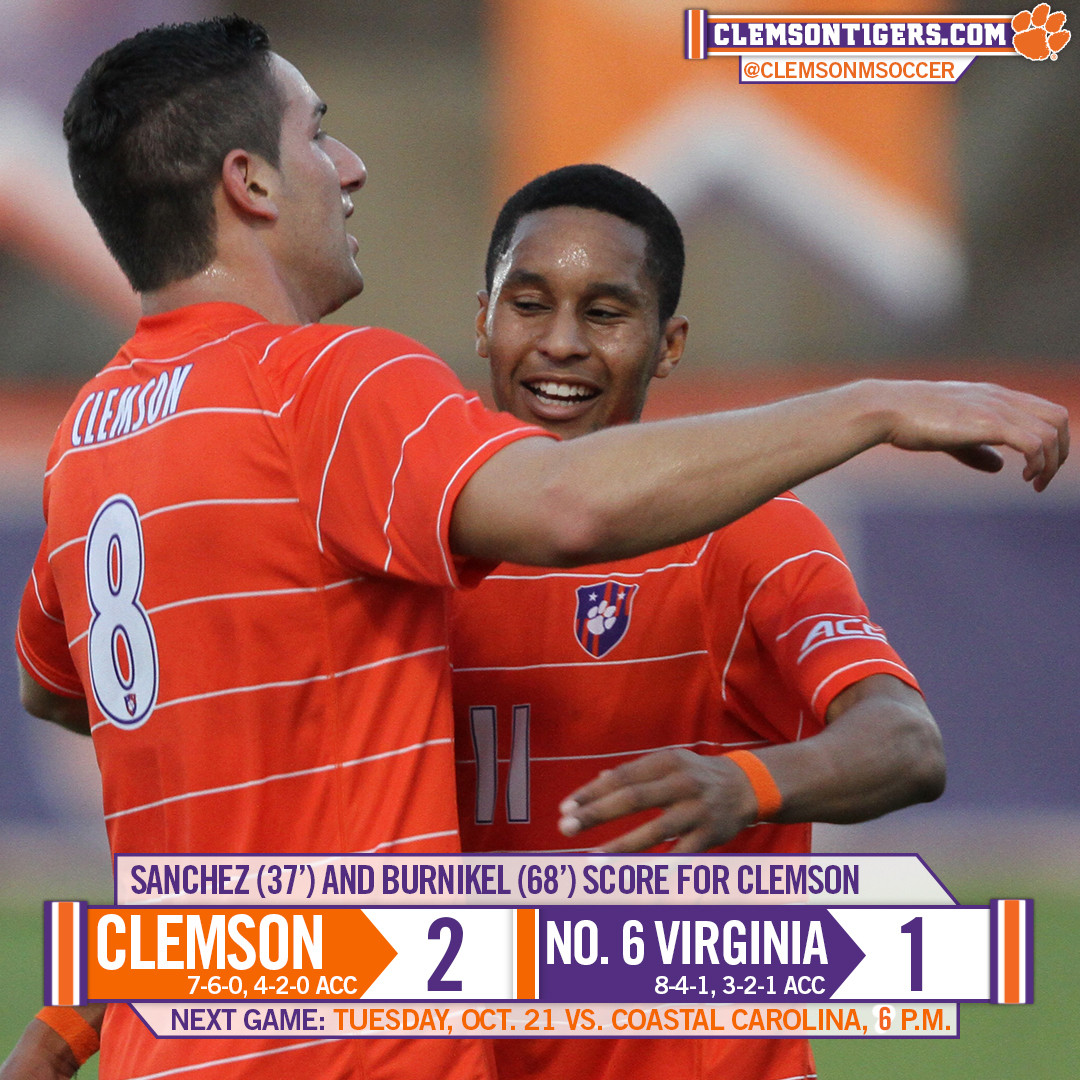 CLEMSON, S.C. – The Clemson men’s soccer team improved to 7-6-0 overall and 4-2-0 in the ACC with a crucial 2-1 conference win over No. 6 Virginia Friday night at Historic Riggs Field. Clemson is on a two match winning streak and has now won the last three matches in the series against Virginia.

Senior Manolo Sanchez got the scoring started for the Tigers with his second goal in as many games. Sophomore Alex Happi took a shot that was saved, but the rebound went straight to Sanchez. He stopped the ball in midair, took the shot from 15 yards out and buried it in the 37th minute.

Sophomore Austen Burnikel continued his strong play of late in the 68th minute with his third goal of the season. Sanchez and sophomore Iman Mafi both assisted on the goal. Sanchez passed the ball down the right side of the field where Mafi took it and crossed it into Burnikel for a close range shot. Sanchez now has five assists this season.

“Its certainly a good win,” head coach Mike Noonan said. “Virginia’s a very good team, they’ve shown that throughout the course of the year. I was proud of our team. Getting Manolo’s goal was terrific and the second goal presented itself for Burnikel and we hung on at the end.”

Virginia’s only score of the match came in the 80th minute when reigning ACC Player of the Week Eric Bird took a pass from Sam Hayward and chipped it over the goalkeeper from 15 yards out.

The Cavaliers put a second ball in the net in the 87th minute, but it was waived off after Glodack was fouled. Glodack saved an initial shot, but the ball rebounded off Glodack back into play. The shot that was taken after the rebound went in the net, but the foul had already been called on the Cavalier that took the initial shot.

Redshirt junior goalkeeper Chris Glodack, coming off a shutout win over Pittsburgh on Oct. 11, played a full 90 minutes in goal and saved three shots. He picked up his third win of the season. Clemson and Virginia both shot the ball 11 times in the match, but Clemson held a 6-3 advantage in corner kick opportunities.

Clemson continues a short home stand against No. 25 Coastal Carolina on Tuesday, Oct. 21 at 7 p.m. The match was originally scheduled for last Tuesday, Oct. 14, but was cancelled due to inclement weather. The contest can be seen on TigerCast on ClemsonTigers.com.