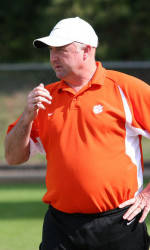 This is the highest the Tigers have been ranked in the preseason NSCAA poll since the 1995 team was ranked third in the NSCAA preseason poll.

Clemson finished the 2005 season with a 15-6-3 record overall. The Tigers return 13 letterwinners and seven starters from last year’s team that advanced to the NCAA’s Final Four.

Head Coach Trevor Adair will be entering his 12th season at Clemson and has a 147-66-21 record at the school.

Clemson will open the 2005 season on Friday, August 25, at South Carolina in Columbia, SC.