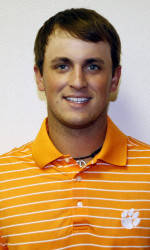 Clemson in Second Place after First Round of Carpet Classic

Alabama has a three-shot lead over Clemson after shooting a team score of 280 on Friday. Clemson is second at 283, followed by Auburn at 285 and Georgia Tech at 287. Fourth ranked Georgia is fifth at 288, while Wake Forest is sixth at 289.

Dannelly, playing in his first career round as a Clemson golfer after transferring from Coastal Carolina, had nine birdies during his round. The native of Easley, SC had five birdies on the front nine when he shot a 33 and four on the back when he shot a 34.

McCuen Elmore shot a two-under-par 70 to lend support to Dannelly. The junior had three birdies and just one bogey in a consistent day of golf. He was three-under-par 33 for the back nine, the best back nine among Clemson golfers on Friday. He stands in a tie for seventh place after the first round.

Junior Jacob Burger or Orangeburg, SC had an even par 72 on Friday and is in 16th place after 18 holes. Burger had two birdies and two bogeys to go with 14 pars on Friday. He had nine-hole scores of 37-35.

Crawford Reeves fired a two over par 74 on Friday. He had a rough start with double bogeys on the third and fifth holes, but had four birdies on the day and an even par 36 on the back side.

Alex Boyd, who won a playoff to get the last spot on the Clemson team for this event, had a 77 in the first round and his score did not count towards Clemson’s team score.