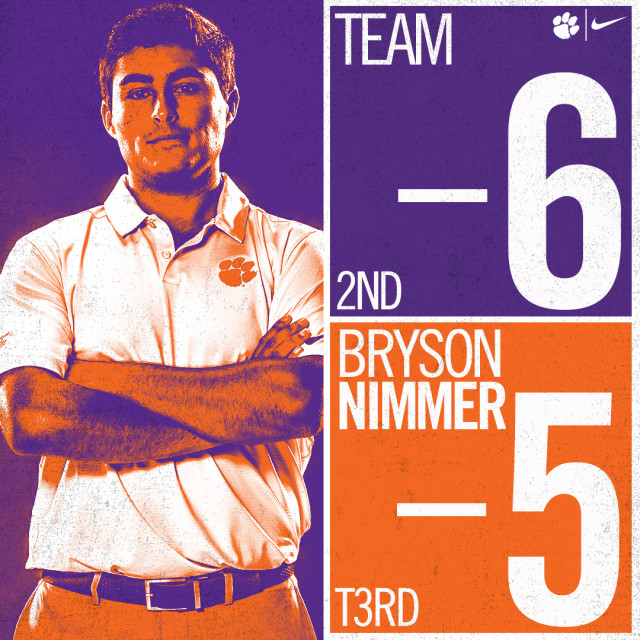 Clemson in Second After First Round of Bandon Dunes Championship

BANDON, Ore. – Bryson Nimmer shot a five-under-par 66 to lead No. 15 Clemson to a six-under-par score of 278 and a second-place ranking after the first round of the Bandon Dunes Championship at Bandon Dunes Resort in Bandon, Oregon. The 14 teams in the field will continue play in the second round on the par 71 Pacific Dunes course on Monday.

No. 22 Arizona State holds the lead with an 11-under-par 273, and Utah sits just one shot behind Clemson with a five-under-par 279. Washington State is also holding close with a four-under-par 280 that has them at fourth.

Nimmer’s first-round 66 has him tied for third in the field with Arizona State’s Alex Del Ray Gonzalez. Nimmer had eight birdies and a bogey and double bogey on the day and is just one shot behind the field’s leader in Arizona State’s Chun An Yu.

Reigning ACC Men’s Golfer of the Month Turk Pettit is tied for 11th with a two-under-par first round score. Pettit had four birdies and two bogeys in the round. Coleman Self is tied for 14th at one-under-par as Clemson’s non-counter. Kyle Cottam is tied for 21st after the first round, shooting even-par with an eagle, five birdies combined with five bogeys and a double bogey. Rounding out the Tigers in the field are William Nottingham, who is tied for 33rd at one-over-par, and Colby Patton, who is tied for 48th at three-over-par.