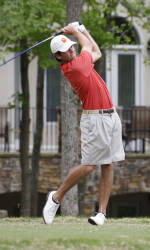 Clemson in 11th Place After First Day of Isleworth Collegiate

Clemson, SC–Senior Ben Martin fired an opening round 75 on Sunday to lead Clemson to a 307 team score and an 11th place standing after the first round of the 15-team Isleworth Collegiate at Isleworth Golf Club in Windermere, FL. The tournament, regarded as the top college tournament of the fall season, features seven of the top 10 teams in the nation. Play continues on Monday and Tuesday.

Clemson was in sixth place at 10 over par as a team entering the last hole, but Clemson’s five golfers played the final hole at nine over par. It meant the difference between a sixth place an 11th place standing after the first day.

Martin shot 75 for the first day and stands in 23rd place. He had five birdies, most among Tigers, but had three double bogeys, including one on the final hole. Luke Hopkins shot a four over par 76 and stands in 33rd place individually. The senior played the last seven holes at even par.

Freshman Corbin Mills had a 77 to rank third best among Clemson golfers. He had a double bogey on the 11th hole, but played solid down the stretch. Classmate Crawford Reeves was seven over through 13 holes, but played the last five at even par. He was the only Clemson golfer to make a par on the difficult 18th hole.

After making a birdie on the 17th hole, Jacob Burger was just two over par as he went to the final hole, but he scored a nine on the final hole to finish with a 79.

Stanford has the lead after the first round with a 289 score, while TCU is second at 290. Number-one ranked Oklahoma State is third at 291 and Florida is fourth at 292.