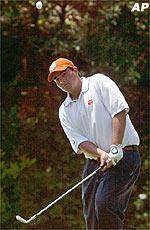 New London, NC – Jack Ferguson and Brian Duncan both shot even par 72s to lead Clemson to a 293 team score and a two place improvement in the team standings in the second round of the ACC Men’s Golf Tournament at The Old North State Club at Uwharrie Point, NC. The Tigers stand in fourth place after two rounds, 10 shots behind team leaders Georgia Tech and Duke.

The third and final round of the 52nd annual event will be played Sunday at the par 72 course that is 7102 yards in length.

Ferguson had a 71 in the first round to go with his 72 in the second round and stands in a tie for second place in the individual race with Roberto Castro of Georgia Tech, who has also had rounds of 71-72. Ryan Blaum of Duke is the individual lead at five-under-par 139 for his first two rounds.

Ferguson has finished third and second at the ACC Tournament each of the last two years, respectively. Ferguson is trying to become the first golfer in Clemson history to finish in the top three at three consecutive ACC tournaments.

Brent Delahoussaye, Clemson senior from Greenville, is also in the top 10 after two rounds after scores of 73 and 74. Duncan had a 77 in the opening round to go with a 72 on Saturday and his 149 total is tied for 13th.

Georgia Tech had the low round of the day on Saturday, 290, and tied Duke for the team lead after 36 holes. Both teams stand at 583, seven-over-par. NC State and Clemson both had team rounds of 293 on Saturday. The Pack, which has beaten Clemson just once in the previous 24 tournaments over three years, has a one shot lead over the Tigers entering the last round.

Clemson is nine shots ahead of fifth place Virginia, who is at 602. Florida State is sixth at 6-3, followed by seventh place Wake Forest at 605. Maryland is eighth at 618, North Carolina is ninth at 619 and Virginia Tech is 10th at 623.

Ferguson did not have his normal consistent round as he had five bogeys and five birdies in scoring his 72. It was his eighth career round in the ACC Tournament at The Old North State Club and all eight have been scores at 72 or better. He birdied the 18th hole to keep his streak alive.

Duncan birdied the first and second holes to get off to a great start. He had a double bogey on the seventh hole and a bogey on 17 or he would have had an under par performance.

Clemson freshman Tanner Ervin also was a strong contributor on Saturday with a second round 75. He had an 85 in the opening round, including a nine on the 18th hole, then started Saturday with a bogey. But, he came back strong and was just two over par for his last 17 holes.

Ervin’s 10-shot improvement was the best over consecutive rounds by a Clemson golfer in the ACC Tournament since Brad Clark went from 78 in the second round to 68 in the final round of the 1986 ACC tournament at Bryan Park in Greensboro.