Clemson Improves to No. 2 in Latest United Soccer Coaches Poll

Clemson Improves to No. 2 in Latest United Soccer Coaches Poll

CLEMSON, S.C. — The Clemson men’s soccer team was ranked No. 2 in the country by the United Soccer Coaches poll, the organization announced on Tuesday. They were also given six first-place votes, lagging just behind Georgetown for the top-slot.

This week the Tigers defeated South Carolina 5-0 and South Florida 3-0, improving their record to 4-0. Clemson allowed a goal in the first nine minutes of the season and has not conceded since, resulting in three straight shutouts and 351 consecutive minutes of action and counting without allowing a goal.

Mohamed Seye leads the team with four goals and Oskar Agren and Justin Malou, both 2020 All-ACC selections, lead the back line. Captain and goalkeeper George Marks has been organizing the defense beautifully throughout the season, and he’s been rewarded with two solo-shutouts.

The Tigers begin ACC competition on Friday when they travel to Raleigh to take on N.C. State, and they will return home on Tuesday for a matchup with UNC Greensboro.

For all of the most up-to-date information regarding Clemson men’s soccer, be sure to reference clemsontigers.com and follow @ClemsonMSoccer on Twitter. 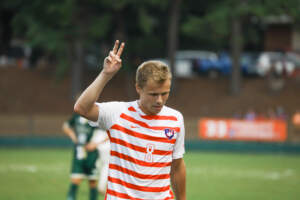