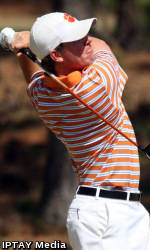 NEW LONDON, NC – Crawford Reeves and Corbin Mills combined to shoot 10 under par on Saturday and lead Clemson to an 11-under par team score in the second round of the Atlantic Coast Conference Men’s Golf Championships at the Old North State Club in New London, NC. Clemson stands in fourth place after two rounds at 11-under par for 36 holes, a 565 total, two shots better than 17th ranked Duke.

Georgia Tech holds the team by a sizeable margin, while Virginia is second and Florida State is third.

Saturday was the best combined career round vs. par by classmates Reeves and Mills, the top two players on the Clemson team this year. The combined 10-under par day was the best by any Clemson twosome at the ACC Tournament since April 22, 2006 when David May had a 65 and Brian Duncan a 67 in the second round.

The Tigers finished with a 278 score for the day, 10 under par, the best team round since the Tigers had a school record 268 in the second round of the 2006 tournament. Reeves 66 tied for the third best round by a Clemson player at the ACC Tournament, the best since David May had a 65 in the second round at the same course in 2006.

Clemson made a remarkable comeback during the second round and in comparison to its first round when the Tigers shot one under par 287. The Tigers started slowly on Saturday and stood in 10th place at two over par for the tournament at one point. But, Larry Penley’s team shot 11-under par on the back nine and jumped six places in the team race.

“I told the team last night that this would be a character day,” said Penley, who is in his 29th year at Clemson. “We watched Georgia Tech make a lot of birdies on Friday. The difference today was that we made some birdie putts. I don’t believe we can overcome Georgia Tech’s lead going into tomorrow, but we will have a chance to move up some spots. I am very proud of this team.”

The player Penley had to be most proud of was Reeves, who had an opening round 80 on Friday, his worst of the year, then improved to a career best six-under-par 66. It marked the second best comeback in the ACC Tournament in Clemson history. In 1985, Brad Clark went from an opening round 80 to a second round 63. That 63 at Bryan Park Country Club in Greensboro, NC is still the Clemson record for any round and the ACC Tournament record for any league player.

“Today said a lot about Crawford and his character,” said Penley. “Really, yesterday was a fluke. We talked yesterday that great golfers have short memories and I had confidence he would come back with a great round on Saturday. And he did, shooting his career low round.”

Reeves got off to a great start with a birdie on the first hole and an eagle on the par four second hole. “I had 124 yards to the flag and hit a wedge into the hole on the fly,” said Reeves, of his shot on the second hole for a two.

Reeves stayed at two or three under until late on the back nine when he birdied the 16th, 17th and 18th holes, believed to be the first Tiger to birdie each of the three finishing holes at The Old North State Club.

Reeves hit his drive on the down-hill 16th hole into a bunker so he wasn’t expecting to make a birdie on that hole. But, his second shot finished 12 feet from the hole and he made the putt for birdie. On 17 he hit his tee shot with a six-iron to within 20 feet. “I had the same putt last year and made it, and I did it again today. I knew exactly how it would break.” Reeves had his second best career round at the Old North State Club in the final round last year.

Reeves then got up and down from off the 18th green for birdie when he made a six footer. He also had a 20-foot birdie putt on the 13th hole. His eagle on the second hole was his fourth of the year, best on the team.

Mills round of 68 was his best second-round score of the year. He was outstanding with the putter as he had eight one-putt greens, four of which were birdie conversions and four were putts of five feet or more to save pars. Mills was even par through 10 holes, then made five birdies and a bogey the last eight holes. He made a 15-foot down hill birdie on 15, then made a 10-footer from hole high on 16. After a bogey on 17, he made a two-putt birdie on the par five 18th.

Freshman Billy Kennerly also made a strong comeback on Saturday, improving by four strokes to shoot a two-under par 70. He played the last nine holes in three under par thanks to three birdies and no bogeys. Kennerly, whose 72.37 stroke average is second best in school history by a freshman, recorded his 11th under par round of the year on Saturday. He is second on the team to Corbin Mills’ 12 under par rounds.

Thomas Bradshaw, who had an opening round 70, had a two over par 74 on Saturday and is tied with Kennerly at 144. Bradshaw finished strong with a birdie on the 18th hole when he got up and down out of the rough right of the green.

McCuen Elmore, who also had a 70 on Friday, scored a 78 on Saturday and his score did not count towards Clemson’s team score.

Clemson should tee off between 10 and 11 AM on Sunday. The results can be followed on theACC.com.