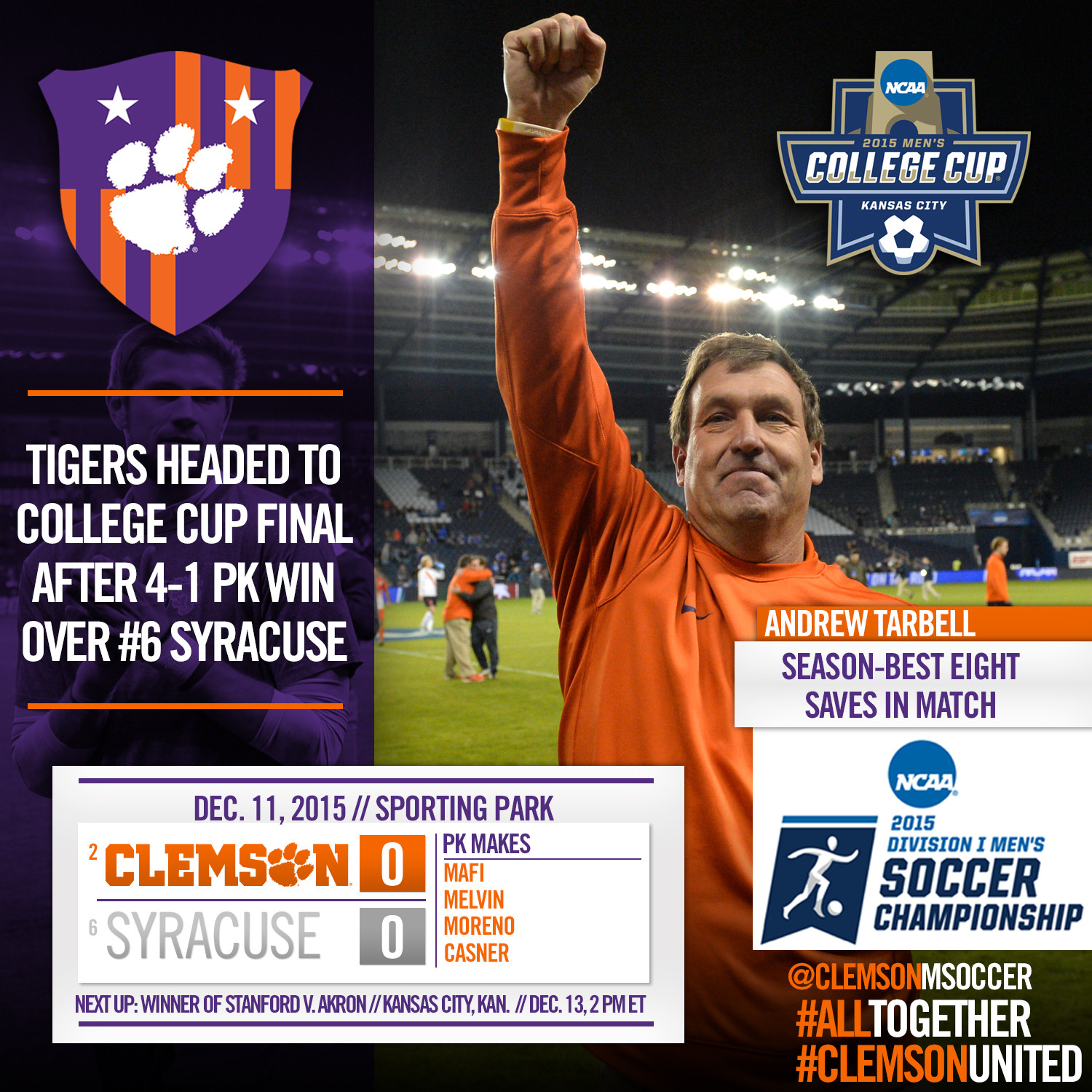 KANSAS CITY, Kan. – For the first time in 28 years, and the fourth time in program history, the Clemson men’s soccer team will play in the championship match at the College Cup after advancing over Syracuse in penalty kicks in Friday’s semifinal. The Tigers and Orange played 110 minutes of scoreless soccer, in which redshirt junior goalkeeper Andrew Tarbell posted a season-best eight saves. Then, four-straight Tigers stepped up to the line and drilled their penalty kicks to send the team to play for a national title on Sunday.

“The game of soccer is cruel sometimes,” said Head Coach Mike Noonan. “We are very happy that we advanced, but you have to give a lot of credit to Syracuse. They played exceptionally well. They made it very difficult for us. Both teams know each other really well. I’ve got these two guys to my right (Casner and Tarbell) to thank for being in the College Cup finals. I’m really happy for Clemson; it’s been a long time. We’ve talked about three things through the course of the year. We talked about being ruthless, being relentless, and being resilient. We were certainly resilient today.”

Tarbell and the Clemson defense, led by senior defender and NSCAA First Team All-American Kyle Fisher, were the story of the first 110 minutes. Syracuse had a 15-5 advantage in shots and a 10-6 edge in corner kicks for the match, but the Tigers’ stingy defense kept the Orange off the scoreboard. In addition to the season-high eight saves, the solo shutout was the ninth of the year for Tarbell. The draw sent Clemson to penalty kicks for the second-straight game, as the Tigers’ tied Maryland and advanced 3-1 in PKs in the Elite Eight on Dec. 4 in Clemson, S.C. in order to reach the College Cup.

Junior Iman Mafi handled the first penalty kick, and made it. Mafi was three-for-three on PKs during the regular season, and also led off with a successful shot when the Tigers advanced over Maryland last week. Tarbell’s stellar night continued when he saved the first Syracuse PK, giving the Tigers a 1-0 edge through the first round. The keeper posted two saves on PKs for Clemson in the contest against the Terrapins.

Sophomore Michael Melvin took the second PK for the Tigers, which he made. The next Orange player made, and was followed by a make by junior Thales Moreno, who was the PK hero when Clemson advanced over Maryland a week ago. The third Syracuse shot attempt went high, which left the decision in the hands of T.J. Casner. Without pause, the senior drilled his shot into the lower left side of the net to send the Tigers to the title match.

This is the fourth trip to the national title match for the Clemson men’s soccer program. In two of the three previous trips, 1984 and 1987, Clemson won the National Championship. Both titles were won under the direction of I.M. Ibrahim. Noonan mentioned the Tigers’ late head coach in his post-match press conference.

“I talked to Coach Ibrahim’s widow, Julie, when I first got to Clemson. I told her that we came to Clemson to honor her late husband’s legacy and to add to it. We hope to do that on Sunday.”

Clemson (17-2-4) faces the winner of Friday night’s semifinal match between Akron and Stanford in the College Cup Championship on Sunday, Dec. 13 at 1 p.m. CT (2 p.m. ET) at Sporting Park in Kansas City, Kan. The match will be televised on ESPNU.