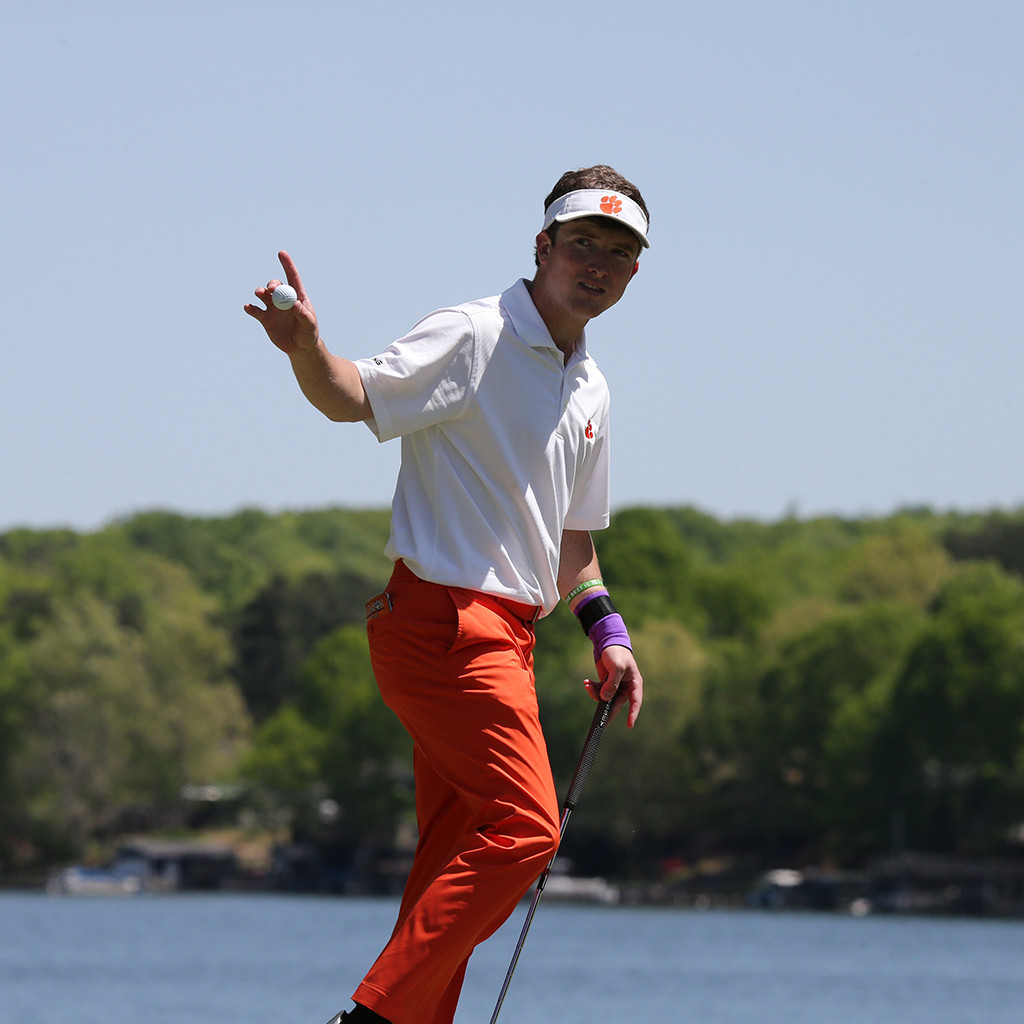 Clemson Has First Round Lead at ACC Tournament

Clemson, S.C.—Miller Capps had a consistent round of three under par 69 and Stephen Behr had a mercurial round of two-under-par 70 to lead Clemson to a 281 team total and a one-shot lead after the first round of the Atlantic Coast Conference Men’s Golf Championship at The Old North State Club in New London, N.C. on Friday.

The Tigers have a one-shot lead over consensus number-one ranked Florida State entering Saturday’s second round on the par 72 course that is an hour northeast of Charlotte.  Virginia is third after an opening round 283, while Virginia Tech and defending champion Georgia Tech are tied for fourth at 284.

Four Clemson players had rounds under par, the fifth time that has happened this year, but the first time Clemson has done it at the ACC Tournament since April 22, 2006 when Clemson had a team round of 268 in the second round, the lowest round in an ACC event by a Clemson team.

There were only 15 under-par individual rounds on Friday and Clemson had four of them.  Anders Albertson of Georgia Tech has the individual lead with a five-under-par round of 67.  Capps is Clemson’s top player with his opening 69 and he is in a tie for fourth place.  Behr is in a tie for ninth with his two-under-par 70, while Cody Proveaux and Austin Langdale are tied for 13th after rounds of 71.

Billy Kennerly, Clemson’s top player for the year, had an opening round 73 and he did not count towards Clemson’s team score, just the second time all year that has happened.

Capps was Mr. consistency with four birdies and just one bogey, a four on the par three 17th hole.  The junior made birdies on the two par three holes on the front nine and finished with 14 pars.  His first birdie of the day came on the par three third hole when he chipped in from just off the green.

Behr on the other hand had a bit of a wild ride through the course on Friday.  He missed a three-foot putt on the first hole to make a bogey and had two other bogeys within the first six holes.

That made five consecutive birdies for the first time in his Clemson career.  He actually had a streak of four straight at Yale last weekend.  His five birdie putts were a combined 82 feet in length.  He made pars the rest of the way to finish with the 70.

“I wasn’t playing that badly the first six holes, but I was hitting it on the wrong side of the green,” said Behr, who shot his third straight under-par round at the Old North State Club over two years.  “I thought I could get hot if I just started hitting my approaches on the correct side of the hole.  And I finally did.  I left myself uphill, right-to-left putts and I made five in a row.”

The entire Clemson team started to play well on the back.  Clemson had shot +2 as a team for the first nine and was in a tie for seventh place.  Larry Penley’s Tiger then played the back nine in nine-under, making 12 birdies among the four players whose score counted.   That backside performance included eight birdies and no bogeys on holes 10-12.

Proveaux also finished fast with birdies on the last two holes to finish with a 71.  He made four birdies on the backside and shot 33.  Langdale, who tied for Clemson’s best player last year at the ACC Tournament as a freshman, also birdied the last hole to shoot 71.

Clemson will play with Florida State and Virginia on Saturday and start at 11:30 a.m. off the first tee.    The 12 teams are scheduled to play 18 holes on Saturday and 18 more on Sunday.