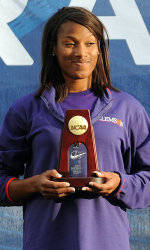 Mamona was the most notable to earn the honor on Wednesday. She is coming off a national championship performance in the triple jump, the eighth NCAA title in history for the Clemson women’s track & field program. Mamona, who now owns four All-ACC Academic Team honors, was a second-team ESPN the Magazine Academic All-American as well.

Weber was a first-team Academic All-American, announced last week by CoSIDA. Weber is now a four-time member of the All-ACC Academic Team (includes indoor honors as well). She won the ACC crown in the heptathlon with a conference record earlier this outdoor season.

Kennedy concludes her career as a highly decorated student-athlete. The May graduate in health science earned six All-ACC Academic Team honors in her career with the Tigers. She was All-ACC in April in the pole vault and became the first Clemson female to surpass 13 feet in the event.

Buchholz was another All-ACC performer on and off the track as a senior. She was third place in the javelin, giving her three career all-conference nods in the event. She concludes her career with four All-ACC Academic Team selections as well.

Farias was the lone freshman included on the team, but this was her second All-ACC Academic honor of the 2010 season. She also received the recognition indoors. The native of Brazil finished sixth in the heptathlon at the ACC Championships in April. The lone newcomer to the squad was Kulik, Clemson’s record-holder in the 3000m steeplechase and a sophomore from nearby Simpsonville, SC.

On the men’s side, Moss earned the All-ACC Academic recognition for the fourth time in his career. He had a strong outdoor season, highlighted by a runner-up finish in the decathlon at the ACC Championships and fourth-place showing last week in the competition at the USA Championships. Moss set the school record this season (7,628 points) in the decathlon.

Tromp, a French exchange student in his lone season at Clemson, received the honor for the second time in 2010 (indoor as well). He broke Mitch Greeley’s school pole vault record after clearing 18’0.5″ in a second-place finish at the ACC Championships in April.

Iverson won the honor for the second time in his career, his first since the 2007 season. He was one of the team’s most consistent distance runners. The only freshman named All-ACC Academic for Clemson was Fraser, an ACC Championships scorer in the 100m dash. Fraser also competed at the NCAA East Prelims last month.