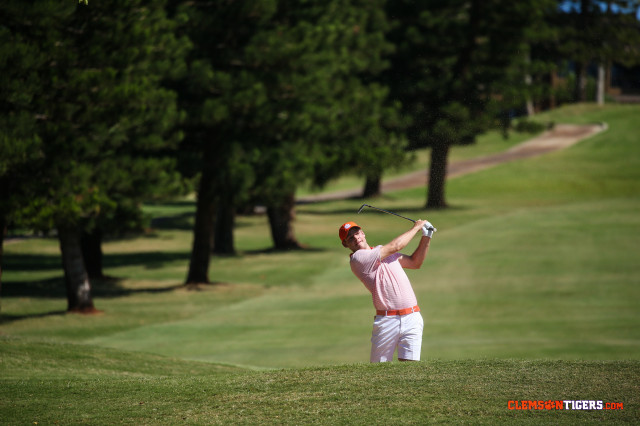 Clemson, S.C.—Doc Redman made birdie on each of his last two holes, and Turk Pettit finished second overall, leading Clemson to a one-shot victory at the Puerto Rico Classic at Rio Mar Country Club on Tuesday. It was the 75th career win and 10th in the last three years for Hall of Fame Coach Larry Penley.

Clemson trailed Georgia Tech by eight shots heading into the final round, but the Tigers shot a team round of even-par 284 on the Ocean Course at Rio Mar, the low round of the day for the 15 competing teams.

Clemson finished with a team score of 854, two-over-par, for the 54 holes, one shot better than eighth-ranked Oklahoma, three shots better than host school Purdue and five shots ahead of seventh-ranked Georgia Tech. Alabama, ranked No. 1 in the nation by Golfstat entering the tournament, finished in fifth place at 866, 12 shots behind the Tigers.

“It was a great comeback victory against a strong field,” said Penley, who has now won the Puerto Rico Classic three times, including each of the last two years. “Doc and Colby made a lot of clutch putts and Turk was solid as a rock all week.”

One of the keys for Clemson was its performance on par four holes. For the tournament, Clemson played the par four holes in nine-over-par, nine shots better than any other team.

It was the 75th win for Penley, and the 26th time his team has trailed entering the final round before coming back to gain victory. The eight-shot deficit tied for the third largest comeback victory since he became head coach in 1983-84.

Pettit and Redman both had rounds of 70 on Tuesday to lead the Tigers. Pettit, a freshman who played his high school golf in Auburn, Ala., had rounds of 69-69-70 for a 208 on the way to runner up honors behind Lee Hodges of Alabama, who finished just two shots better at 206 for the 54 holes.

Redman finished 17th in the field of 75 golfers, but his birdie-birdie finish was a key to Clemson’s one shot team win. The sophomore, who won the 2017 US Amateur, finished on the par five fifth and par four sixth holes. He had a two-putt birdie from 30 feet on the fifth, then hit his drive on the 344-yard par four to within seven yards of the hole. He chipped to three feet and made the short birdie putt.

Colby Patton, son of former Clemson All-American and 1989 US Amateur Champion Chris Patton, finished seventh for the tournament with a 213 score after rounds of 69-72-72.

Junior All-American Bryson Nimmer also contributed with a 21st place finish after rounds of 73-72-72. Nimmer played his final seven holes in two under par, a key to Clemson’s comeback victory.

Freshman Kyle Cottam had 11 birdies for the tournament, tied for best on the team and finished 52nd with a 226 score.

Clemson golfers William Nottingham and Coleman Self both played in the Puerto Rico Individual Classic at the par 72 River Course over the last three days. Nottingham finished 11th out of the 23 players with a 227 score, while Self was 15th with a 230 total.