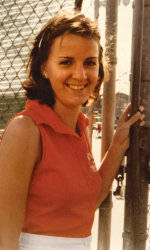 There have been many firsts in Susan Hill-Whitson’s life as it relates to athletics. While she may not be the first female inducted into the Clemson Ring of Honor (she is the third and the first since 2003), chances are she appreciates the distinction as much as anyone else.

Hill-Whitson, who was known as Susan Hill as a student-athlete at Clemson, dominated the ACC as a tennis player from 1977-81, winning four conference crowns and being named an All-American three different times. Thirty years later, she is still the only four-time conference MVP in the history of ACC women’s tennis.

An extraordinary talent, Hill is also an extraordinary Clemson person who has never shied away from her passion for the university that extended its hand to her when few around the country would. In fact, she was the first woman to receive a full athletic scholarship to Clemson.

Getting the offer of a full ride to school as a female athlete was nearly unheard of nationwide. It took awhile for it to become commonplace, mostly due to the accolades bestowed upon student-athletes like Hill. Because of the groundbreaking nature of the decision, it was made after careful consideration of all factors involved for an innovative tennis coach at a school nestled away in the foothills of South Carolina.

“(Former Clemson Women’s Tennis) Coach Mary King had seen me play a couple of years beforehand,” recalled Hill. “She had tried to keep in contact a little bit. At that time, I was very excited to be able to play tennis in college, especially with a full scholarship. That was a big deal to my family and a big deal to me.”

The scholarship was one reason Hill chose Clemson. But from the beginning, she felt something special about the school that has developed into a lifelong bond. In fact, one of the things Hill said she was most proud of was helping other young women find a way to campus by way of athletics.

“I fell in love with Clemson,” she said. “That was one of the best decisions I’ve ever made in my life. To be the first woman scholarship athlete was an honor. Hopefully, that helped pave the way for future women at Clemson. I feel very fortunate that I came around at just the right time.”

Her relationship with her alma mater has extended to her family. Her husband, John, is a Clemson graduate, and three of her children either have graduated from or are currently attending the school.

“We live in Georgia, but as the children were growing up, we made lots of visits to Clemson,” stated Hill. “So they grew up loving it, because both my husband and I graduated from there.”

Hill enjoys a rarified air in the realm of Clemson women’s tennis. The mantra that “records are meant to be broken” does not apply to her. During her career, she won 86 percent of her matches and 82 percent of her sets, both of which are still school records after more than three decades. During her sophomore and junior seasons, she had a combined record of 63-6.

Perhaps her greatest accomplishment, however, was winning back-to-back-to-back-to-back conference championships at #1 singles. It was a goal that developed over time due to her initial run of success as a freshman.

Those four titles might be her most memorable aspect for Tiger fans and tennis historians, but Hill’s proudest moment as a collegiate athlete was winning the 1979 ACC doubles title with her sister, Carolyn. The memories she gathered during the run have lasted through the years, and she is grateful for the opportunity to provide her sister with an unforgettable experience.

“That was very special,” explained Hill. “Carolyn and I had played in juniors before we came to Clemson, so we knew each other’s playing styles and knew each other on the court really well. She didn’t play in the lineup in singles, but she and I together made a pretty decent doubles team. I’m so pleased that I can look back and see that we won a conference title. That’s very meaningful to me.”

After her career was over, Hill had every opportunity to pursue a professional career. But, she knew her life was supposed to lead her elsewhere, so she decided to take on a whole different set of challenges.

“I decided to go that way with life,” admitted Hill. “Right after college, I got married, so I was entering a new phase of life. That’s what I wanted to do. Then, of course, we had these five great children. I have no regrets. It wasn’t something that I had planned to do.”

It did not take long for her accolades to be recognized by the university to which she gave so much. She was inducted into the Clemson Athletic Hall of Fame in 1986 (the first female athlete so honored) and was named to the ACC 50-Year Anniversary team in 2002. Now with her induction into the Clemson Ring of Honor, she has finally reached the pinnacle as a recognized student-athlete alumnus of Clemson.

Hill still likes to stay in touch with the current program from afar. Her interactions with the current players and coaches are limited, but she is glad to see that despite the changes in the modern game, there is still high-level tennis being played in Tigertown.

“I keep tabs on them on the Clemson website,” said Hill. “I have met Coach (Nancy) Harris and I have been over to a match. I keep track of how they’re doing, and they have done great. Since she’s been coaching there, she has really done a great job. She has a great program.”

Hill’s enshrinement into such an exclusive fraternity cements the notion that she will forever be remembered among the legends of Clemson athletics. But Hill said she would like to be remembered more for how she played and whom she was than for what she did.

“For the few people who may have seen me play, I hope they remember that I went out and tried my best in every match,” she said. “I put a lot of emphasis on sportsmanship. Hopefully they can say I won and lost with the same grace. I hope they know that I realize how fortunate I was to play at Clemson. I feel so fortunate to have been able to go there and to have been a part of a tennis program that set the standard for future programs.”

Now among all the firsts on Hill’s resumé, there is another. She is now the first tennis player in Clemson’s history to be inducted into the Ring of Honor.