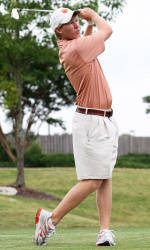 When asked who is his most experienced player, Head Golf Coach Larry Penley provided a quick answer… Jacob Burger.

“Jacob is `Mr. Consistency,’ because his score counts every time,” said Penley, who is in his 29th season as head coach at Clemson.

Penley has seen some consistent golfers in his time. No less than 13 of his players have gone on to earn their PGA Tour cards, including current professionals Jonathan Byrd, Lucas Glover, Ben Martin, Kyle Stanley, D.J. Trahan, and Charles Warren.

Those are some lofty names in Clemson history. But when it comes to consistency, Burger is right there with them.

Entering his senior year, Burger has played 71 rounds of golf for the Tigers and his score has counted 64 times, including 58 of the last 62. He is fifth in school history in percentage of rounds counted (90.1). That mark is better than Byrd, Trahan, Warren, and many other outstanding Tiger All-Americans.

“If Jacob is four-or-five-over early, don’t worry, because he is going to bring it back to around par,” stated Penley. “It is good as a coach to have a player who gives you that consistency…someone you can count on.

“He is that way off the course as well. He is a consistently terrific student, a 3.3 career GPA guy. He is a great leader by example and is one of the leaders of this team.”

Burger’s consistency comes naturally. His father, Gil Burger, is a graduate of The Citadel, and his discipline and work ethic have rubbed off on his son.

“My dad has had a big impact on me my entire life,” explained Burger. “He was a hard worker when he was young and had to work hard for everything he got. Nothing was handed to him.

“He had to cope with disappointments that made him stronger. When he was a freshman at The Citadel, he was on the football team and hurt his shoulder, so much so that he couldn’t play anymore.”

His father and mother (Mona) have been regulars following the Tiger golfers the last four years, and they are excited to see their son finish his career strong with another trip to the NCAA National Tournament.

Jacob has been a part of three NCAA Tournament teams so far, including the 2010 squad that finished 16th in the nation. Entering his senior year, he has a career average of 73.24, with 56 of his 71 career rounds at 75 or better.

As a sophomore, Burger had just one top-10 finish, but he had six finishes between 11 and 19, giving him a team-best seven top 20s. It was a total better than Martin, a current PGA Tour member, who was a senior on that squad.

Burger finished last season strong, with scores of 74 or better in each of his last 15 rounds, and 10 of those 15 were at 72 or better. He finished sixth at the Furman Invitational, helping the Tigers to the team championship for the second straight year, and 11th at the USCA Cleveland Classic.

The native of Orangeburg, SC was also consistent in his summer amateur events. He has reached the match play of the North-South Amateur four times. This year, he won his first match, then lost a heartbreaker that went 10 extra holes before it was decided.

Burger has reached the U.S. Amateur Championship three times as well, including this past summer. He won his qualifier for the U.S. Amateur in Hilton Head in June. In August, he finished a career-best fourth place at the South Carolina Amateur. His solid summer should put him in position to have an outstanding senior season.

“We would like to get a few more rounds in the 60s from him, but he works very hard and is striving to do that,” added Penley. “We saw what he could do in the first tournament last year when he shot a 65 at The Farm. He has a great short game and he is a terrific putter. When we get him in the fairway off the tee a little more often, he will really go low.”