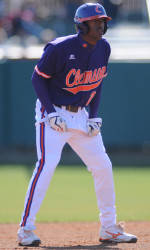 The ultimate goal for any college baseball team is to see its flag being raised at the College World Series in Omaha, NE and to have a chance to compete for a national title. Last season, behind the play and leadership of players like co-captain Chris Epps, Clemson was able to accomplish that goal for the first time since 2006.

Epps, a senior in 2011, decided to enroll at Clemson after being drafted in the 28th round by the Chicago White Sox out of high school.

“Clemson seemed like the right fit for me,” said the outfielder from Stone Mountain, GA. “I didn’t believe it was necessary to rush a pro career, plus, an education is so important. Clemson is one of the top programs in the nation, and I knew that playing here would help me gain the experience needed to have a future in pro baseball.”

Epps made an immediate impact as a freshman, going 5-for-5 in his first five official at-bats as a Tiger. He finished the year with 19 runs, two doubles, one homer, 12 RBIs, and five steals in 40 games (33 starts). He added a .406 on-base percentage, which was second-best on the team.

After a midseason slump, Epps was inserted into the lineup as the leadoff batter and DH for the final 23 games of the season. In those games, he was 30-for-90 (.333) with four doubles, one triple, three homers, 20 RBIs, 24 runs, and six steals. He also reached base via a hit or walk in 22 of those 23 games and hit safely in 12 of the last 13 games, including all seven of the Tigers’ NCAA Tournament games.

Epps was a major factor in all four of the Tigers’ wins in the Clemson Regional. He had a bunt single in the ninth inning and scored the winning run in the Tigers’ first win against Tennessee Tech on May 29. In their second win of the regional, he went 3-for-3 with a homer, two RBIs, two runs, and a walk. Against Oklahoma State on June 1, the final game of the regional, his two-out, two-run homer on an 0-2 pitch in the seventh inning started Clemson¹s late-game comeback. Epps finished the game 2-for-4 with a double, homer, two RBIs, and two runs. After his solid performance, Epps was named MVP of the Clemson Regional.

Epps was named a co-captain as a junior and started off strong in 2010. He earned the second MVP honor of his career when he received the Bob Bradley Award as Clemson’s MVP of the three-game series against South Carolina. In three starts, he was 7-for-14 with two homers, a grand slam, one double, six RBIs, six runs, and two walks.

“I’m just out there to benefit my team,” said #26. “I don’t care about the award as long as we get the W. Those awards are just nice to look at back home.”

For the second straight year, Epps went through a mid-year slump at the plate in 2010, but he was able to turn it around late in the year. In Clemson’s three super regional games against Alabama, he was 4-for-8.

“Usually when I go into a slump, it’s because of something small that takes work to correct. I work with the coaches to get back on track. There’s not a better time to turn it on than late in the season and into the postseason.”

After defeating Auburn in the regional and Alabama in the super regional, the Tigers made the trip back to Omaha. In the first game against top-ranked Arizona State, the Tigers won 6-3 thanks in large part to Epps’ two hits.

“Words can’t describe the feeling of going to Omaha. You still think it’s a dream until you actually step foot onto the field. We didn’t see Arizona State as the #1 team in the nation, we saw them as a team standing in our way.”

Epps finished the year ninth in the ACC in walks (46) and started a team-high 35 games as the leadoff batter. His career mark of one walk every 3.97 at-bats is third-best in school history, a quality you look for in a leadoff batter.

“I always look to get a good pitch to drive,” Epps said of his ability to draw a walk. “I never go up to the plate looking to walk, but I trust my hands so well that I’m not afraid to get deep into counts and make the pitcher work.”

Earlier this month, he was named a co-captain for the second straight year for Head Coach Jack Leggett’s Tigers.

“That is truly an honor,” admitted Epps. “My coaches really believe in me, and that means a lot. I’m looking forward to having a winning season and playing it with the upmost swagger. I really want to enjoy this last year with my teammates. My greatest memory as a Tiger was going to Omaha last year. We had fun on and off the field, and hopefully we can go through that again.”

Although the Tigers fell short in their quest for a national title in 2010, the senior co-captain is confident about the 2011 team’s prospects.

“Are we going back to Omaha? I have all the confidence in the world that we will.”