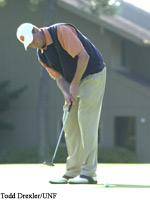 D.J. Trahan and Matt Hendrix both had top 10 finishes to lead Clemson to a third-place finish at the Toyota Collegiate Golf Championship on Sunday. The 15-team event was held at the Southern Highlands Course in Las Vegas, a par 72 course that is 7440 yards in length. It is the longest course the Clemson golf team has ever played.

The top four teams were separated by just four strokes. Oklahoma State overcame a six stroke deficit in the last nine holes to gain the victory with a 856 score, just two shots better than the Tigers. UNLV was second at 857, while Clemson was tied with Texas at 858. It marked the third time in the last eight tournaments that Clemson has tied with the Longhorns. That includes last year’s NCAA tournament at Ohio State when the two teams were tied for third.

NC State was fifth at 861, while Arizona State was sixth at 864. Arizona was seventh at 868, while Georgia was eighth at 879. Georgia Tech was the only other ACC team in the field and the Yellow Jackets were 11th at 873. Augusta State, who has defeated Clemson in three tournaments this year, was 12th with a 295 total.

Clemson had team rounds of 284-286-288 in recording its 858 team score. Clemson was the only team in the tournament to shoot par or better in every round, but still did not gain the victory. The third-place finish ended Clemson’s school record streak of seven consecutive tournaments in first or second place.

It was quite a battle for the championship on Sunday. Oklahoma State, UNLV, Texas and Clemson all had the lead at some point on Sunday. Texas had a three shot lead when the day began. The Tigers were actually 12-under as a team playing the back nine and had a two-stroke lead. But the 17th hole proved to be a troublesome hole as the Tigers were four-over-par on that hole on Sunday.

Trahan shot a 69 in the final round to finish at 209. He finished tied for second, just one stroke behind medallist Ryan Moore of hometown team UNLV. Trahan needed a birdie on the par five 18th hole to tie Moore, but he scored a par to finish in a tie with Lars Brovold of Alabama, Adam Rubinson of TCU and Justin Walters of NC State. . Trahan had rounds of 69-71-69 in the 54-hole event. He broke John Engler’s Clemson career record for under-par rounds in a career. He now has 69, one more than Engler’s total between 1998-02.

Hendrix finished sixth with a 210 score, just one stroke behind Trahan. The junior from Aiken had rounds of 69-69-72 in recording his 210 score, the second best tournament of his career in terms of strokes under par. It marked the second time this year that he had a pair of rounds in the 60s in the same tournament. It was his third finish in the top six this year.

Sophomore Jack Ferguson had a solid tournament with a 215 score and three consecutive rounds at par or better. It was the second time in his short career that Ferguson had done that. He finished 17th individually, his sixth top 25 finish this year.

Clemson will next be in action March 22-23 when the Tigers play in the Chris Schenkel Invitational in Statesboro, GA.