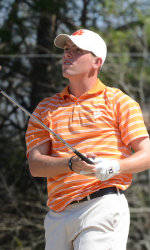 CLEMSON, SC – Crawford Reeves fired a career best round of five under par 67 to lead Clemson to a third-place team finish at the 2011 ACC Men’s Golf Championship on Sunday. The 58th annual event was held at the par 72 Old North State Club at Uwharrie Point, NC. It was the third straight top three finish for the Tigers, who now await an NCAA Tournament bid in a couple of weeks.

Clemson finished the ACC Tournament with a team score of 861. Georgia Tech, ranked third in the nation, was first at 831 and Duke was second at 851. It was a solid performance for Larry Penley’s Tigers who were the sixth best team in the ACC in terms of team rankings entering the event, but the Tigers finished ahead of Virginia, NC State and Wake Forest, all squads ranked ahead of Clemson entering the event.

Reeves had shot a 68 twice this year, once at Furman on March 20 and in the first round of the Augusta State Invitational on April 2. He got off to an incredible start with six birdies in his first seven holes on Sunday. He then made bogey on the eighth, ninth and 10 holes, to fall to three under, then came back with a birdie on the par five 11th hole. So, the native of Greenville made just one par in his first 11 holes. He then made par on holes 12 through 17, then finished with a birdie on the final hole, his eighth birdie of the day.

Corbin Mills shot a one over par 73 on Sunday and finished with a 212 score for the tournament, four under par, and good enough for a sixth-place finish in the individual race. Mills had scores of 70-69 in the first two rounds. He shot a 39 on the front nine on Sunday to fall out of contention for the medalist honors, but he closed with a 34 on the back nine, including birdies on the 15th and 18th holes. He birdied the 18th hole all three rounds. It was the fourth top 10 finish of the year for Mills.

McCuen Elmore, who had a 69 in the second round to tie Corbin Mills for team honors that round, had a 75 on Sunday. He finished at two over par 218 and was 21st in the final standings.

Jacob Burger, Clemson’s top player in terms of stroke average entering the tournament, had a 74 in the final round and finished with a 218 score for the 54 holes, good enough for a tie for 21st place. He now has 12 straight rounds at 74 or better and has four straight top 21 finishes.

Thomas Bradshaw had a final round 79, so his score did not count towards Clemson’s team score. But, his second round 71 was a contributing factor to the Tigers second round team score of 282.