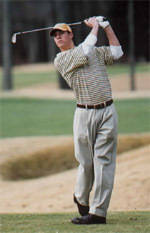 New London, NC-Senior Stephen Poole fired a final round 67 and classmate Brian Duncan finished third overall with a 208 tournament score to lead Clemson to a third place finish at the 2006 ACC Men’s Golf Tournament at The Old North State Course in New London, NC. It marked the 12th straight year that Clemson finished in the top four at the ACC Tournament. It was also the last regular season tournament for Larry Penley’s Tigers, who will await their NCAA regional bid in a couple of weeks. Clemson finished in the top three of each of its last three events of the spring.

It marks the first time since 2003 that Clemson has entered the NCAA Tournament with a streak of three consecutive top three finishes. Georgia Tech and North Carolina tied for the team title with identical 31-under par scores of 833. The two teams had a five-man playoff, but were still tied after two holes and then declared co-champions. It marked the first time there were declared co-champions of the ACC golf tournament since 1990 when Clemson and NC State were declared co-winners.

The 268 total tied the Clemson single round record.

It was a three team race much of the tournament. NC State was fourth at 853, 13 shots below the Tigers, while Wake Forest was fifth at 860. Cameron Triangale of Georgia Tech won medalist honors with a 206 score, one stroke better than Kyle Reifers of Wake Forest.

Clemson then got off to a strong start in the third round and actually took a one stroke lead at 33 under par compared to Tech’s 32 under with nine holes left. But, the Tigers string of birdies stopped and Clemson played the remainder of the tournament at nine over par as a team. Tech held steady the remainder of the tournament to finish in a tie with a consistent North Carolina team.

Clemson had four players finish under par for the tournament and four ranked in the top 16 of the individual standings. Duncan led the Tigers for the event with a career best 208 score, and a career best eight-under-par. His third-place finish tied for his best tournament performance as a Tiger. He also was third at The Ridges in the first tournament of his junior year.

Duncan had rounds of 68-67-73 in recording his 208 total. On Sunday, he finished his second round with four birdies in his last six holes and was tied for the lead entering the final round. In the third round he had 17 pars and one bogey to record his one over par 73 score.

Poole finished his second round on Sunday with a double bogey on the 18th hole, leaving him with a 68 score. He did not let that last hole bother him as he started six under par for his first 11 holes in the third round. He had consecutive birdies three times in the first 11 holes. His round included a birdie at the difficult uphill and into the wind eighth hole when he chipped in from off the green. His only bogey of the third round was on the 15th hole.

Poole, a senior from Spartanburg, finished 12th overall with his 212 score. His 67 in the third round was the second best of the field for the last round, topped only by a 66 by Ted Smith of North Carolina. Poole is now nine under par for his last nine rounds combined.

Freshman David May was Clemson’s second best golfer for the 54 hole event on the par 72 Old North State Course. He had a disappointing 74 in the final round as he had four bogeys in his last seven holes, but the native of Auburn, NY had a Clemson team best 65 in the second round. He completed that round on Sunday morning before turning in the 74 in the third round. His 65 in the second round tied his own Clemson single round individual best of the year. He also had a 65 at the Carpet Classic back in he fall. That 65 was also the second best score in an ACC Tournament by a Clemson freshman. Brad Clark had a 63 at the 1985 ACC Tournament during his freshman season.

Tanner Erwin had a 73 in the final round and finished with a 213 score, giving Clemson four golfers with under-par totals for the first time since the 2002 ACC Tournament. Ervin’s best round was in the second when he had 68. He had bogeys on 12, 13 and 15 that hurt his third round, but he finished with a birdie on the 18th hole.

Freshman Vince Hatfield finished 35th overall wit ha 220 score He shot a three over par 75 on Sunday that included bogeys on each of his last five holes.