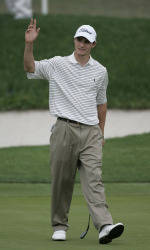 Clemson Finishes Sixth at US Collegiate

Clemson, SC – Kyle Stanley fired a one-under-par 71, one of just six players in the 78 player field to record an under-par score on Wednesday, leading Clemson to a sixth-place finish in the 15-team United States Collegiate golf tournament at the Lakeside Course at the Golf Club of Georgia.

Clemson finished with a team score of 898 for the 54 holes played over the last three days. The Tigers were in second-place heading into the final round, but Ben Martin, who had been Clemson’s second best player in Tuesday’s second round and was the team’s second best player over the course of the season, withdrew prior to Wednesday’s final round due to illness.

Clemson defeated third-ranked Alabama, fourth-ranked Florida, fifth-ranked Southern California and sixth-ranked and defending NCAA Champion Oklahoma State with its sixth-place finish. The national field included seven of the top 10 teams in the nation and 13 top 25 teams overall. The national field found the course challenging as Georgia won the event with a team score of 20 over par. Only one player, Webb Simpson of Wake Forest, finished the tournament with an under par score.

Stanley started fast on Wednesday with five birdies in his first 10 holes. He had a double bogey on the 14th hole that kept him out of the top 10. His 12th place finish was his seventh straight finish in the top 20 this year. He improved his score by at least three strokes in each round after an opening round 78.

Tanner Ervin was Clemson’s second best golfer in the tournament with a 224 total, just one shot off of Stanley’s pace. Ervin started the day in first place, but he struggled to an 80 in the final round. He also started solid, and was even par through five holes. But, the junior was six-over-par from holes 7-9, and finished with a 43 on the front side. His 16th place finish was his second best individual finish of the year.

David May was Clemson’s second best golfer on Wednesday and third best player for the tournament. The sophomore from Auburn, NY had a wild ride in the final round. He had eight birdies, and just four pars all day in shooting a 73. He was five under par through 10 holes and had six birdies in a seven-hole span between the fourth and 10th holes. He made four consecutive birdies at one point. But, he had triple bogey on the 12th hole and a double bogey on 18.

Freshman Sam Saunders shot an 81 on Wednesday and finished in 48th place individually. He had back-to-back double bogeys on the 12th and 13th holes and had his only birdie of the day on the 17th hole. He had a highlight round in the opening 18 holes when he scored a 71, helping the Clemson team to an opening round lead.

Martin had rounds of 79 and 75 in the first two rounds and was in 46th place individually before withdrawing prior to Wednesday’s final round.