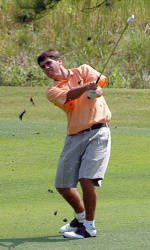 Florida State won the title with a 26-under par score of 838. Duke was second at 841, while North Carolina was third at 846. Georgia Tech finished with a 17-under par score of 847. There was a two hour rain delay on Sunday. Tech was 18 under prior to the delay and five over par as a team after the delay. Wake Forest was fifth at 848 and Clemson was sixth at 854, four shots ahead of NC State. When Clemson finished it was five shots behind NC State, but the Pack stumbled down the stretch.

The sophomore from Greenwood, SC got off to a great start on Sunday with birdies on the first two holes. He then stumbled on the par four ninth hole when he made a triple bogey. He hit his second shot into some bushes and hit his third shot over the green into the woods on the other side of the green.

But, Martin came back strong with a birdie on the next hole. He then finished with birdies on 17 and 18 to record his second under-par round of the tournament. His birdie on 17 was the result of a 20 foot putt. He made birdie on 18 when he got up and down from in front of the green. Over his last 37 holes he made 11 birdies, just one bogey and the triple bogey. Had he pared the ninth hole on Sunday he would have finished third.

Sam Saunders and David May both had even par scores of 72 on Sunday. May finished with a 214 total for the three rounds, good enough for 20th place. It was the third straight top 20 finish for May at the ACC Tournament. Saunders had his best round of the tournament on Sunday. He started with consecutive birdies and had a birdie on the 18th hole.

Clemson will now await an NCAA regional bid. The regional will be held May 15-17 at three different sites.