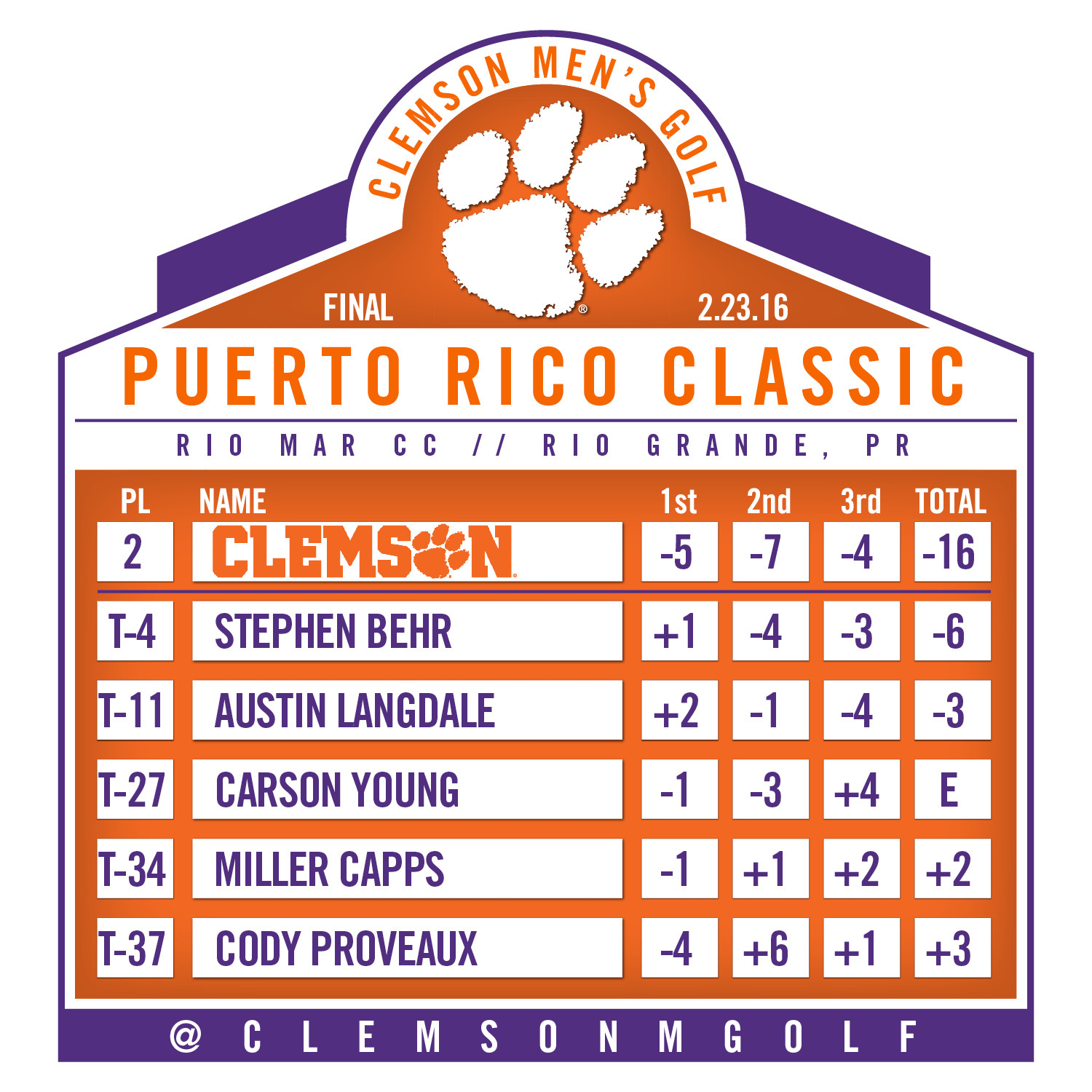 Clemson, S.C.—Austin Langdale tied his career best round with a 68 and Stephen Behr added a 69 in leading Clemson to a second-place finish at the Puerto Rico Classic on Tuesday.   The Tigers were runner-up in the field of 15 teams, six of whom were ranked in the top 20 in the nation entering the event.

Alabama won the three-day 54-hole event at the par 72 Rio Mar River Course in Rio Grande, Puerto Rico with a score of 25-under-par 839.  That included a 12-under-par score of 276 on Tuesday, best in the field.  Clemson shot a 284 on Tuesday tied for he second best round of the day with Kentucky, and finished the 54 holes with a score of 848, 16-under-par.

Georgia was third at 851, while Kentucky was fourth at 853.  North Carolina, ranked 16th in the latest Golf Coaches Association poll, was fifth at 855 and defending ACC Champion Georgia Tech was sixth at 857.   Clemson was the top finisher among five ACC teams that competed in the event.

Langdale had a triple bogey eight on the par five eighth hole, his fifth hole of the day, but rebounded to shoot 68.   He made six birdies and no bogeys on the back nine to shoot 30, best by a Clemson golfer on the back nine this week.  He finished with eight birdies for the day and 15 for the tournament, just one behind the 16 posted by individual champion Robby Shelton of Alabama.   Langdale finished 11th individually with a 213 total.

Cody Proveaux was Clemson’s third best player on  Tuesday with a one-over-par 73.  He had four birdies for the round and finished strong with three birdies in his last seven holes.  He finished 37th individually with a 219 score for the 54 holes, including an opening round 68.

Miller Capps was Clemson’s fourth counter on Tuesday with a two-over-par score of 74.  The senior from Denver, N.C. was three-over-par after two holes thanks to a double bogey/bogey start.  But he settled down with two birdies and just one bogey the rest of the way and finished in 34th place with a 218 score.

Carson Young, who was the only Clemson golfer to shoot under par in each of the first two rounds, struggled to a 76 on Tuesday, but still finished 27th individually with a 216 score.

This was Clemson’s 24th appearance in the Puerto Rico Classic.  Clemson has won the event just one time, in 1999, but has finished second nine times.  This was Clemson’s best finish since a second-place in 2012.