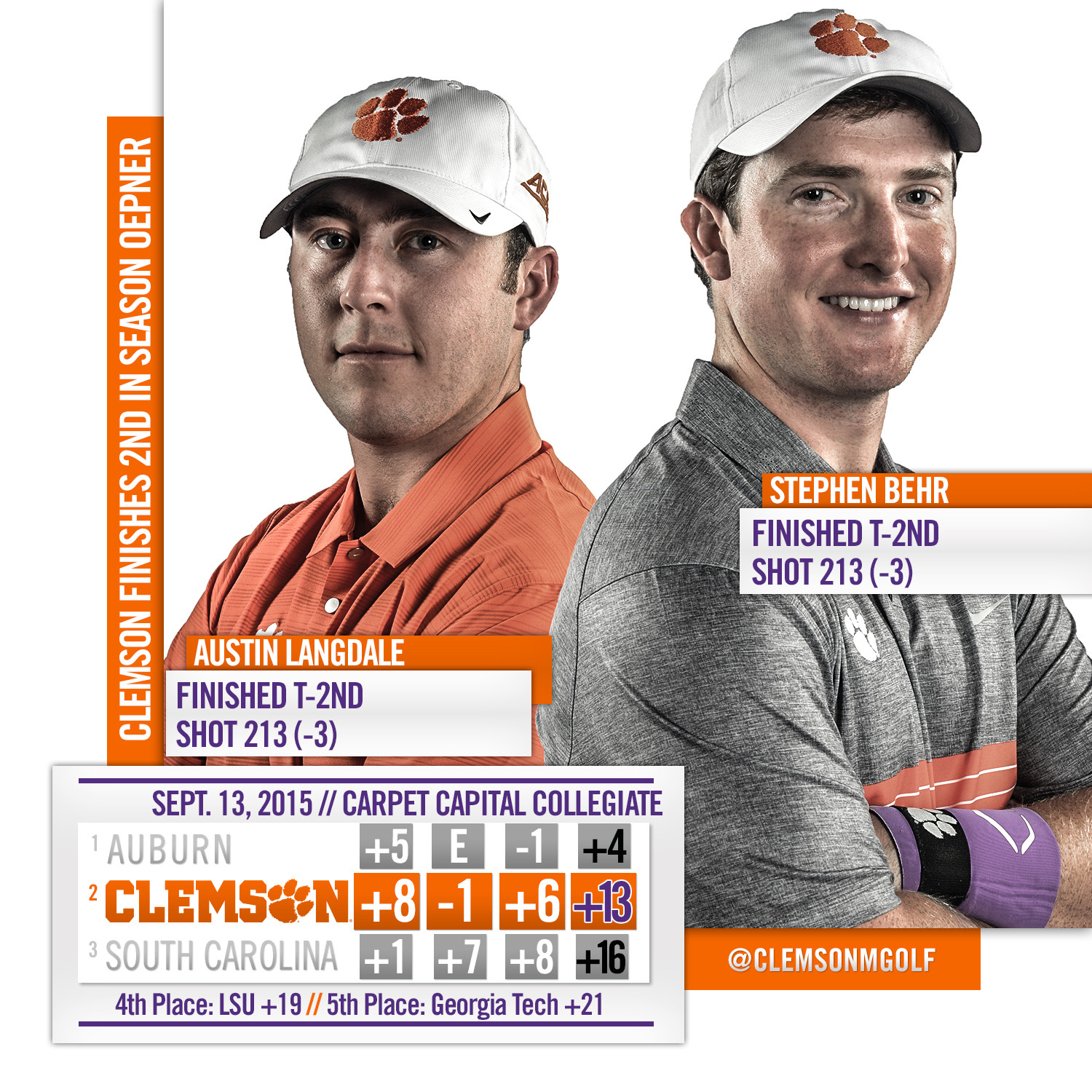 Clemson, S.C.—Austin Langdale fired a three-under-par 69 and joined teammate Stephen Behr with a second-place finish individually to lead Clemson to a second-place team finish a the Carpet Capital Collegiate Classic in Dalton, Ga on Sunday.   Langdale and Behr finished with scores of 213 for the 54 holes, just one shot behind medalist Jacob Joiner of Georgia Tech.

This was the first tournament of the season for Larry Penley’s Tigers, who have played in the event every year since 1988.  Clemson’s second-place finish was the best for the Tigers in the 15 team event since 2006 when current PGA Tour players Ben Martin, Sam Saunders and Kyle Stanley helped Clemson to a second place.

Auburn won the event with a four-over par score of 868. The Tiger were second in the field that included seven top 25 teams with a 877 score.  South Carolina was third, three shots behind the Tigers, while LSU was fourth at  883.  Georgia Tech was fifth at 885 and Alabama was sixth at 895.

“I am really proud of our team,” said Head Coach Larry Penley.  “We hung in there the entire tournament.  The course played very tough with fast greens and some wind today.

“Stephen Behr and Austin Langdale were outstanding for us.  They both putted well and Stephen was really striking the ball well. He hit a lot of fairways.  Austin had a tremendous back nine today.  He made an eagle by hitting a three wood from 252 yards to four feet from the pin on the par five hole.”

Langdale’s 69 tied for the low round of the tournament by any Clemson golfer.  The native of Pendleton, S.C. made par on the first 11 holes of his Sunday round, then made birdie on the 12th and the eagle on the 15th.  He had another birdie on 16, then made bogey on 17 to finish with his three under par score.

Behr shot a 74 on Sunday after rounds of 70-69 to start and finished a 213.  His second place finish was the best of his career.  He had 12 birdies over the 54 holes, tied for the most in the field of 81 golfers.  He played the par four holes at one-under for the event, also tied for the best in the field.

Langdale and Behr became the first Clemson twosome to finish in the top two of a tournament since March 23, 2003 when D.J. Trahan and Jack Ferguson tied for second at the Chris Schenkel in Statesboro, Ga.

Miller Capps, Clemson’s number-one player entering the tournament, was Clemson’s second best golfer on Sunday with a one-over-par 73.  He finished  24th place individually with daily improving scores of 77-75-73 to finish at 225.  He made a birdie on the final hole that was important in Clemson’s drive to a second-place team finish.   Clemson entered the final round in fourth place.

Carson Young shot a 78 on Sunday and finished in 27th place individually with a 226 score, while freshman Coleman Self, playing in his first career tournament, was at 239 and finished 70th.   Redshirt freshman Peter Mathison  played as an individual and had a 233 score for the 54 holes, 55th in the individual standing.