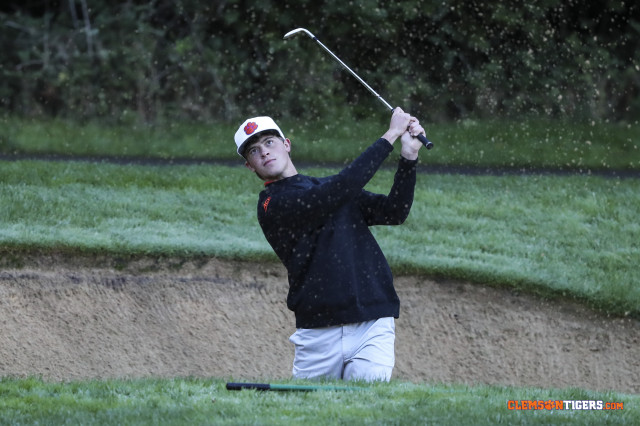 Clemson, S.C.—Freshman Turk Pettit fired a career best six-under-par 65 on Tuesday to lead Clemson to a second-place finish out of 14 teams at the Bandon Dunes Championship in Oregon. The Tigers finished with a 15-under –par score of 837, tied for the low 54-hole team score of the year for Larry Penley’s Tigers.

Arizona State won the tournament with an 824 team score on the Bandon Dunes Course. Washington State was third at 841 and Utah was fourth at 844.

Pettit’s 65 tied for the low score by a Clemson golfer this year. He did not have a bogey and had four birdies and an eagle. The 65 was the low round of the day and he finished third for the tournament, trailing only Chun An Yu of Arizona State and Derek Bayley of Washington State.

His 202 score for 54 holes was the best by a Clemson golfer in the Tigers lineup this year. Colby Patton had a 202 as an individual at the Humingbird Invitational in the fall. Overall, the 202 score by Pettit tied for the fifth best 54-hole score in Clemson history.

The native of Auburn, Ala. whose family now lives in North Carolina had rounds of 69-68-65 for his 202 total.   Pettit joined Doc Redman as the only Clemson golfers this year to have three rounds in the 60s in the same tournament. He was just the fifth player to do it in the last 11 years.

In addition to Pettit’s third-place finish, junior Bryson Nimmer finished tied for seventh with a 207 total, six-under-par. Nimmer had rounds of 66-71-70 in recording his fourth top 10 finish of the year. Tuesday was his 11th under-par round.

Patton was Clemson’s third best golfer with a 70 on Tuesday. The son of former Clemson All-American Chris Patton had a clean round with two birdies and just one bogey to go with 15 pars. He finished with a 219 score, good enough for 48th place.

William Nottingham was the non-counter on Tuesday with a 73, but his 215 total for the 54 holes was 26th overall, third best among Clemson golfers.

Freshman Kyle Cottam had an even par 71 on Tuesday and finished at 216, good enough for 33rd place.

Coleman Self played as an individual and had a 71 on Tuesday to finish at 217, 37th place in the field of 84 golfers. The native of Greenwood, SC had 13 birdies for the 54 holes, second best among Clemson golfers.

This was Clemson’s only tournament in the month of March, but the Tigers will lay three events in April, starting with the Irish Creek Invitational in Kannapolis, NC April 7-8.