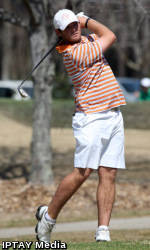 BOWLING GREEN, KY – McCuen Elmore shot a one under par 71 in his final round as a Clemson golfer, but it was not enough to bring Clemson above the five-team cutline at the NCAA regional in Bowling Green, KY. Clemson’s season ended Saturday with an 11th place team finish in the 14-team South Central Regional at Olde Stone Golf Club.

The top five teams advance from each of six regionals from around the country. Clemson was seven shots behind the cutline entering Saturday’s final round. A two under par team round would have gotten the Tigers into a playoff, but a poor start doomed the Tigers. Clemson was six over par in its first hour of play and the Tigers went on to a 297 team round on Saturday and finished at 23 over par as a team, 11 shots off the fifth-place cutline held by the University of Memphis.

Chattanooga won the regional championship with an 859 team score. Texas A&M was second at 860 and UCLA was third at 863. Virginia Tech, who Clemson had beaten in three previous tournaments this year, finished fourth at 874. Memphis scored 876.

It was a regional with upsets. Clemson did not make the top five after being seeded fourth in the regional going into the tournament. Second seeded Arkansas and fifth seeded North Texas also failed to advance.

Nationally, seven of the top 25 teams in the nation failed to advance to the NCAA Championships that will be held in Los Angeles in 10 days. In addition to Arkansas and Clemson, Georgia Tech, UNLV, Duke, New Mexico and LSU were other top 25 teams according to the May 16 Coaches poll who failed to advance. Oklahoma State, who had advanced to the NCAA championship tournament each of the last 65 years, saw that streak end as the Cowboys finished eighth in the regional at the University of Michigan.

Elmore finished his Clemson career with his first under par round of the tournament. His 71 was the best among the Clemson golfers on Saturday and second best by a Tiger all week. He was three under par on the final nine, scoring birdies on two of the par five holes. He was Clemson’s third best golfer for the weekend with a 224 score, good enough for 35th place. It was the 17th under par round of his career. He ended his senior year with 110 birdies, second best on the team.

Reeves had a double bogey on the par five 11th hole on Saturday, his second hole of the day. He drove his ball into deep rough left of the fairway and could not find it. He did finish with a birdie on the ninth hole, his final hole of the tournament, and that allowed him to finish in the top 15.

Corbin Mills also had a frustrating day and shot a 76. The junior finished with a 222 total for the three rounds, good enough for 26th place. It was his worst finish of the season, as he had finished in the top 23 in all eight of his previous events. He had rounds of 74-72 and 76 at the regional.

Thomas Bradshaw had a 74 on Saturday and was Clemson’s second best golfer of the day. He finished with a 225 score for the three rounds, good enough for 39th in the field of 75 golfers. He had 12 birdies for the week and finished the year with a team best 111.

Freshman Billy Kennerly saw his score count with a 76 on Saturday. He finished with a 229 score, good enough for 55th place. He finished the year with a 72.70 stroke average, sixth best in Clemson history. Kennerly’s score counted towards Clemson’s team score in a team best 29 of 33 rounds this year.