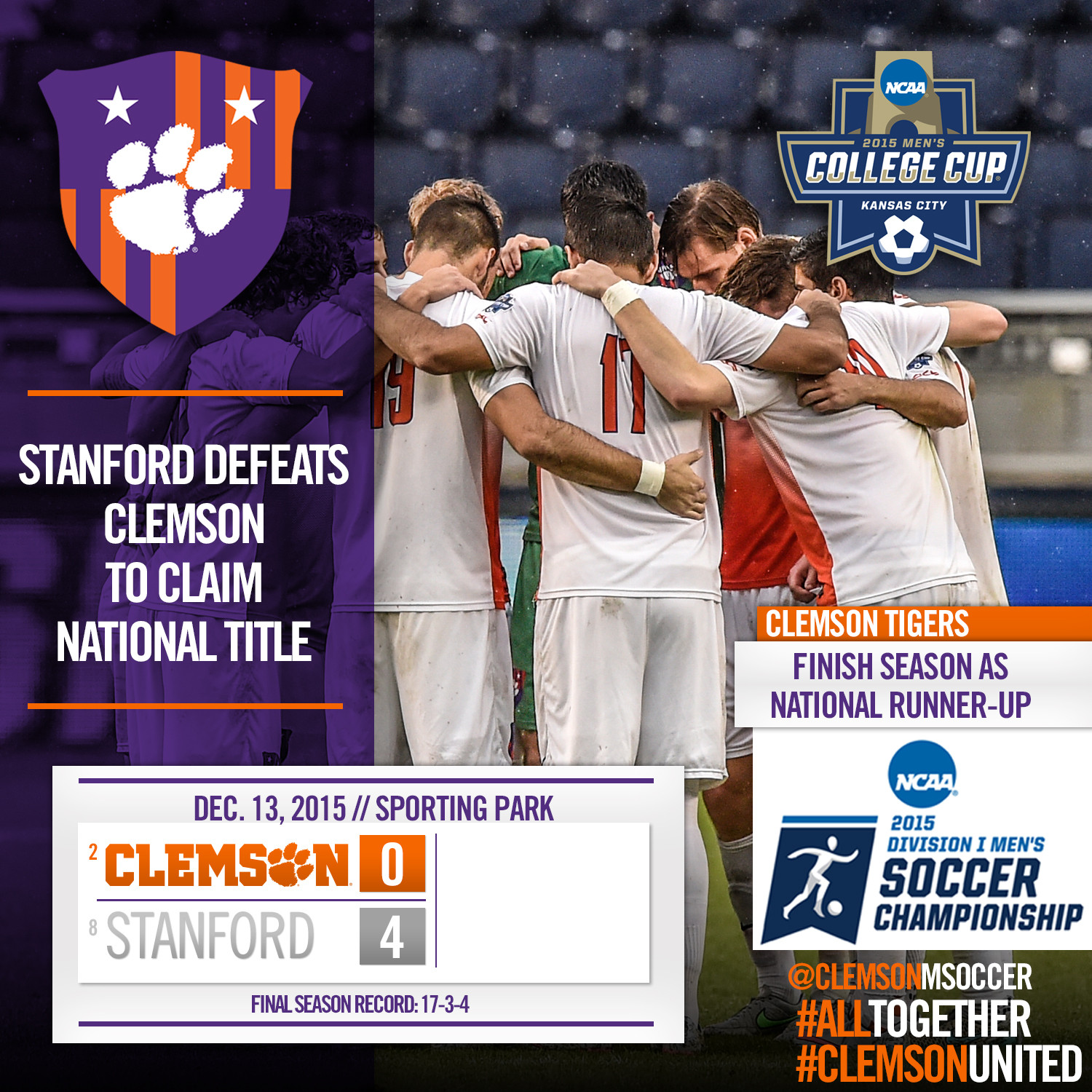 KANSAS CITY, Kan. – The Clemson men’s soccer team’s bid for the program’s third national championship came up short when the Tigers fell to Stanford 4-0 in the College Cup title match on Sunday at Sporting Park in Kansas City, Kan. With the loss, the Tigers conclude the season as the national runners-up, at 17-3-4, while the National Champion Cardinal finish the year at 18-2-3.

“Congratulations to Stanford. They are worthy champions,” said Head Coach Mike Noonan. “To be frank, they took advantage of the mistakes we made, and we made too many mistakes for us to come out on the right side today.

“That said, I’m obviously very proud of this team. We had a bad day at the office, but, as I told them, not one result is going to define our team or the people we have in our locker room. Even though we are upset and disappointed, the sting will go away in a couple of days and we’ll realize that we did something very special this season.”

Jordan Morris, a forward on the U.S. Men’s National Team, was the difference for the Cardinal, scoring their first two goals. The junior scored in the second minute to give Stanford an early lead. For the remainder of the first half, the Tigers seemed to control possession, and created six shots, to the Cardinal’s three, but were unable to capitalize on their chances.

Morris struck again for Stanford in the 51st minute of play for his 14th goal of the year. In the 71st minute, Clemson was called for a foul in the box, and Brandon Vincent made the penalty kick to give Stanford a 3-0 lead. Eric Verso provided the final margin for the Cardinal in the 71st minute. For the second half, Stanford took six shots to the Tigers’ five.

“Stanford is a well-coached team and they executed their game plan well,” said senior co-captain Paul Clowes. “Obviously we would have liked to have a few of our touches back in the final third, but credit and congratulations go to Stanford.”

Clowes and fellow seniors T.J. Casner, Kyle Fisher and Kyle Murphy conclude their Clemson careers as the 2015 national runners-up. This is only the fourth time in program history that the team has finished second or better in the nation. The Tigers were also the runners-up in 1979, and won the national title in 1984 and 1987.

Clowes, Fisher and redshirt junior goalkeeper Andrew Tarbell were named to the College Cup All-Tournament team, as selected by members of the media, at the conclusion of the tournament.