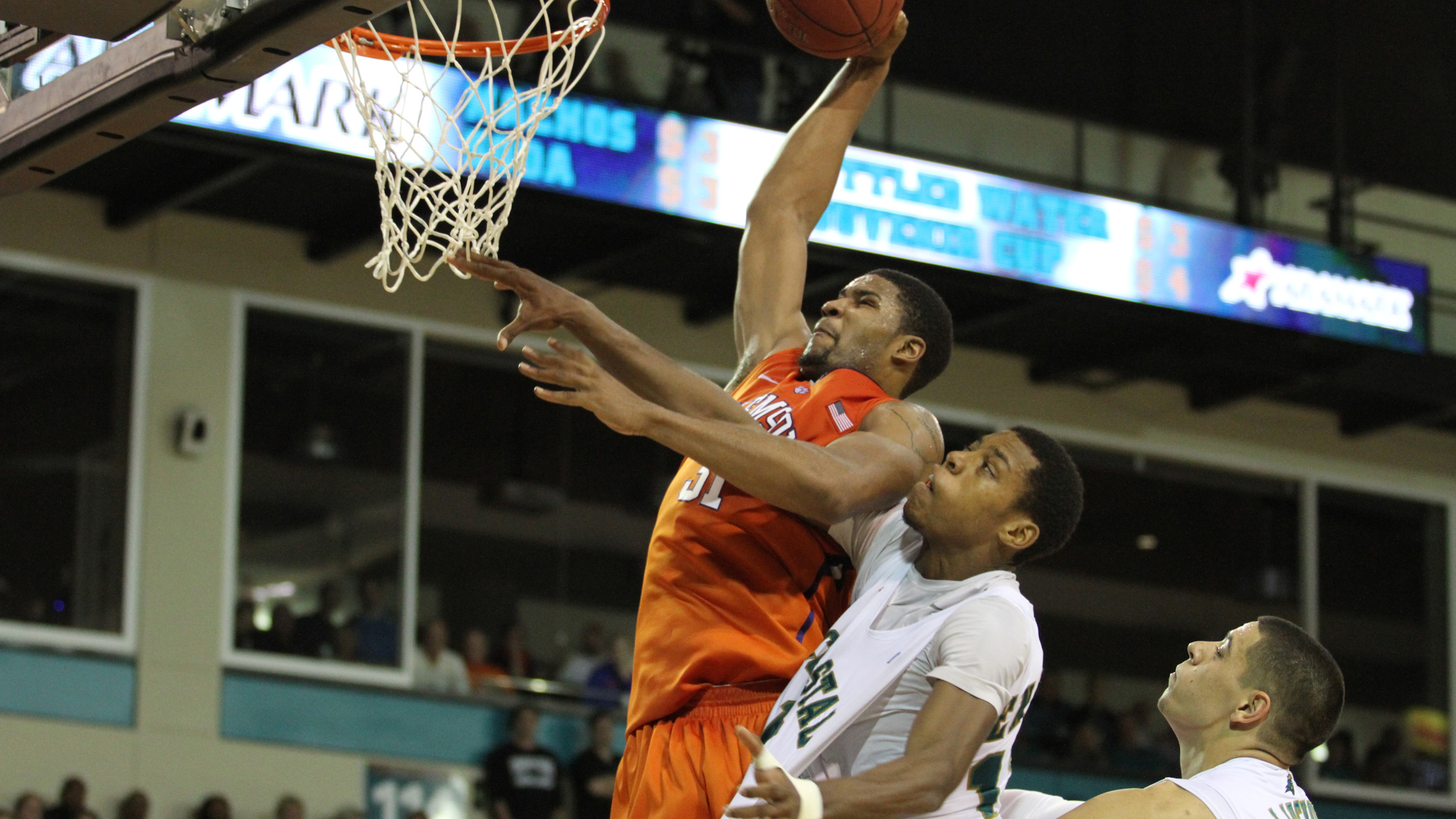 CONWAY, SC – Coastal Carolina led by eight at halftime and shot 54 percent in the second half on its way to a convincing 69-46 victory over Clemson on Wednesday at the HTC Center. The Chanticleers improved to 4-5 with the win, while the Tigers fell to 6-4 with the loss. The 23-point margin was the worst defeat in 75 games under current Head Coach Brad Brownell.Clemson struggled on both ends of the floor. The Tigers shot just 32 percent from the floor, including 4-of-21 (.190) from three. Clemson had a season-high 18 turnovers as well, which led to 20 points for the Chanticleers. Coastal, conversely, shot 46 percent for the game and made 9-of-23 from deep, 39 percent. The Chanticleers owned a +7 advantage on the boards after trailing by two caroms at halftime.Devin Booker had a solid scoring night, producing 16 points on 7-of-11 shooting. Booker added a team-high seven rebounds in 34 minutes. Clemson’s only other player in double figures was freshman Jordan Roper, who posted 12 to give him double digits for a second straight game. Anthony Raffa, who had 21 last season as Coastal defeated Clemson at the buzzer, scored 25 in Wednesday’s contest. Warren Gillis added 12 for the Chants.Coastal, playing for only the second time over the past 13 days, came out with great energy and made its first four field goals en route to a 10-2 lead. Clemson answered with senior leadership in the form of Booker, who scored eight consecutive points for the Tigers at one point to tie the game at 10. After Coastal went back ahead 14-10, K.J. McDaniels scored five in a 7-0 run to put Clemson in front 17-14. But, the Chanticleers had an answer as it put together its own 7-0 run, capped by a Warren Gillis three and driving layup from Raffa.The lead stretched to as high as 10 on an up-and-under move in the paint by Kierre Greenwood, but Clemson was able to get a tip-in as the halftime buzzer sounded from Booker to make it a 27-19 deficit at the break.Clemson amped up its defensive intensity to start the second half and quickly cut the lead to five on a steal and jam by McDaniels. Another dunk off a fastbreak moments later by Jordan Roper and a three by Milton Jennings cut the lead to four at 35-31. As they did all game, Coastal answered on a three by Gillis on a penetrate-and-pitch from Raffa. Badou Diagne then hit one uncontested to push the lead to 10 once again at 41-31.Roper cut the lead to six on a pair of free throws at the 10:19 mark, but Coastal used a 19-4 run to pull away to the victory. Clemson’s defense struggled dramatically down the stretch, yielding 25 points inside the final 10 minutes of the second half. The Tigers return to action at home on Sunday, Dec. 23 to take on SC State. The game – Clemson’s last one before Christmas break – will tip off at 2:00 PM from Littlejohn Coliseum.