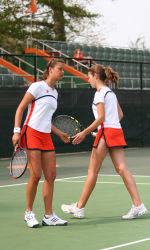 Clemson Falls To California, 4-0, In NCAA Women’s Tennis Round Of 16

GALLERY (courtesy of Mark Crammer and The Orange & White)

ATHENS, GA – The Clemson women’s tennis team suffered a 4-0 loss to California on Friday night at the Dan Magill Tennis Complex on the campus of the University of Georgia in Athens, GA, ending the Tigers’ NCAA tournament run in the round of 16.

Clemson, the #7 seed in the event, concluded its season with a 22-5 record, while the 10th-seeded Golden Bears improved to 22-6 on the year.

“Our hats are off to California tonight,” Clemson Head Coach Nancy Harris said. “They played super tennis and we got off to slow starts on some of our courts. They captured the momentum in doubles and carried it into singles.”

“I am incredibly proud of this team,” she continued. “They performed very well this season, and for a team with three freshmen in the lineup to advance this far, it says great things about the future of our program.”

California went up, 1-0, in the match after posting victories at the flight two and three doubles positions. The Tigers’ 11th-ranked team of Ani Mijacika and Federica van Adrichem upset Susie Babos and Zsuzsanna Fodor, the nation’s #5 tandem, at the top position, winning by an impressive 8-1 margin. The Clemson duo completed the dual season with a 15-4 record and will begin competition in the NCAA doubles tournament on May 23.

The Golden Bear team of Nina Henkel and Stephanie Kusano defeated Estefania Balda and Ina Hadziselimovic at flight two, 8-2, to tie the doubles score at 1-1. The Tiger tandem of Maria Brito and Carol Salge then suffered its only loss of the season, falling in a tough battle to Claire Ilcinkas and Bojana Bobusic, 8-6, at the number three position to give Cal the point.

Singles action was delayed nearly an hour and a half, until 8:30 pm, awaiting the conclusion of an earlier match. Cal then quickly took a 3-0 lead, winning in straight sets at the flights two and three positions. Henkel, ranked #22, defeated Clemson’s Balda at number three, 6-2, 6-1, while Salge fell to the Golden Bears’ 12th-ranked Fodor at the second slot, 6-2, 6-0.

Marion Ravelojaona then clinched the match for California as she defeated Brito at flight five, 7-6(5), 6-1. The final point was scored just after ten o’clock pm.

The Tigers were leading at the flight one, four and six positions when play was suspended. Clemson freshman Mijacika won the first set over defending singles national champion and fourth-ranked Babos at the top slot and was ahead 1-0 in the third frame, while van Adrichem and Hadziselimovic each won her first set at flights four and six, respectively.

Mijacika and van Adrichem will continue their individual seasons next week, as they will begin competition in the NCAA Singles and Doubles Championships.