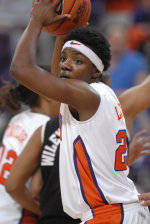 DURHAM, NC – The Clemson women’s basketball team fell to #1-ranked (AP/USA Today) Duke on Monday night, 105-53 at the Cameron Indoor Stadium in Durham, NC. With the win, the Blue Devils remained undefeated on the year at 24-0 (9-0 ACC), while the loss dropped the Lady Tigers to 10-13 overall and 2-7 against conference foes.

D’Lesha Lloyd led the Clemson offense with 14 points, while Christy Brown added 12 points and four assists in the effort.

Alison Bales led all scorers with 21 points for Duke while Carrem Gay, Abby Waner and Wanisha Smith all posted double figures on the night. Bridgette Mitchell pulled down a team-best nine rebounds.

The Lady Tigers hung with the Blue Devils in the opening minutes of the game, leading 10-9 at the 15:46 point. Duke, however, posted the next nine points to take the lead. Clemson kept the deficit under 10 points for the next 5:35 and cut the Blue Devils’ advantage to six at 29-23 as Tasha Taylor hit a shot underneath with 7:39 left in the period.

Duke then stretched the gap to 23 thanks to a 19-2 run that was capped by back-to-back three-pointers by Abby Waner. The Blue Devil lead hit a half-high 25 as Bridgette Mitchell with under five seconds remaining, but Christy Brown hit a three as time expired to make it 54-32 at the break.

Duke then outscored the Lady Tigers by a 51-21 margin in the second half for their 24th victory of the season.

Clemson will be back in action on Thursday night as the Lady Tigers travel to Raleigh, NC for a match-up against the NC State Wolfpack.