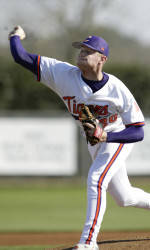 Clemson erupted for 12 runs and 15 hits to defeat #4 South Carolina 12-2 in front of 4,621 fans at Doug Kingsmore Stadium Wednesday. The Tigers improved to 19-13, while the Gamecocks fell to 28-6. The game was the third of four meetings between the two in-state rivals.

Stephen Faris (3-1) pitched the first complete game by a Tiger pitcher against South Carolina since Matt White (1997). Coincidentally, that game, which the Tigers won 15-1 in Columbia on April 9, 1997, was the last time the Tigers defeated South Carolina by double-digits. It was the sophomore righthander’s second complete game in a row, the first Tiger to accomplish that feat since Ryan Mottl in 2000. Faris, the national leader in ERA entering the game, gave up just two runs on five hits, and he struck out seven against one walk. Freshman righthander Andrew Cruse (3-1) suffered his first loss as a Gamecock, giving up three runs on four hits in 1.2 innings pitched in his first career start.

Taylor Harbin had a single, his sixth home run of the season, and a career-high five RBIs to lead the Tigers. Tyler Colvin, Kris Harvey, and Travis Storrer also hit home runs for Clemson. The four home runs were the most in a game by Clemson this season. Brad Chalk had a game-high three hits, as he is 21-for-39 (.538) in his last 13 games. Clemson also snapped the Gamecocks’ nine-game winning streak.

With the win, the Tigers improved to 9-5 against top-25 teams this year. The 12 runs were the most given up by South Carolina this year, and the 15 Tiger hits were also the most yielded by the Gamecocks in 2005.

Clemson opened the scoring in the bottom of the second on Storrer’s solo home run to centerfield, his third of the year. It was also Storrer’s third home run in six career games against South Carolina. Brad Chalk walked, which signaled the end of the night for the Gamecock starter. South Carolina reliever Wynn Pelzer then balked, scoring Casanova.

In the third, Harvey hit a mammoth home run to left field on a 3-1 pitch, his ninth of the year, to put the Tigers up 4-0.

The Gamecocks finally got to Faris in the fourth. Steven Tolleson hit a bloop double down the right-field line and scored on Steve Pearce’s RBI single.

The Tigers answered in the bottom of the inning. Stan Widmann led off with a single and moved to second on Casanova’s sacrifice bunt. Herman Demmink drove in Widmann with a single and went to third on Chalk’s double down the right-field line. Harbin then singled on an 0-2 pitch through the left side, scoring Demmink and Chalk.

Ryan Mahoney led off the fifth with a deep home run to right field, his second of the season. It was the first long ball allowed by Faris all season.

South Carolina got its first two batters on base in the seventh, but Faris got Tommy King to ground into a double play and Davy Gregg to ground out to end the threat.

Casanova led off the eighth with a single and moved to second on Demmink’s sacrifice bunt. Chalk beat out a chopper to second for an infield hit, and then Harbin hit a home run over the wall in left-center to give the Tigers an 11-2 lead. Storrer had an RBI double to left-center that scored Harvey as well in the four-run frame.

The Tigers return to ACC action Friday against Virginia at 7:15 PM at Doug Kingsmore Stadium.