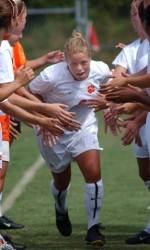 CARY, N.C. – It took a penalty kick shootout for the Clemson Tigers to advance into the semifinal round of the 2004 ACC Women’s Soccer Championship. The Tigers and Seminoles played to a 2-2 tie after 110 minutes of action before the game had to be determined in penalty kicks. Clemson downed Florida State 4-3 in pks and will next face second seeded Virginia in the first semifinal on Friday, November 5 at 5:00 pm at the SAS Soccer Complex.

In a span of 47 seconds, Clemson ran out to an early 2-0 lead. The Tigers first goal came at the 13:45 mark on a Florida State own goal. Then it was the Tigers’ Lindsay Browne finding Allison Graham for her third goal of the season.

Florida State cut into the Tiger lead in the second half as Teresa Rivera netted her first goal of the season off an assist from Marion Cagle.

In the 80th minute, the Seminoles tied the score at 2-2 when Melissa Samokishyn found Kelly Rowland, who fed the ball into the lower right corner of the net sending the game into extra periods.

Both teams played scoreless overtime soccer as the Seminoles out shot the Tigers 4-3 to force penalty kicks to determine a winner. It was just the 10th time in Women’s Soccer Championship history that a game has been determined by a penalty kick shootout.

Clemson and Florida State matched penalty kicks after the first two rounds before the Tigers took a 3-2 advantage after round three. The Tigers would win the shootout 4-3 as the Seminoles’ final attempt by Camie Bybee was saved by Clemson goalie Lauren Johnston.

“I am proud of our team. They showed a lot of character in advancing to the next round. Lindsay Browne and Courtney Foster played great up front.

Lauren Johnston also played well and made a great save in allowing us to win the penalty kick round. The game was a real roller coaster. I can’t really say that it was a game of two halves, because the momentum kept swingin back and fourth.”