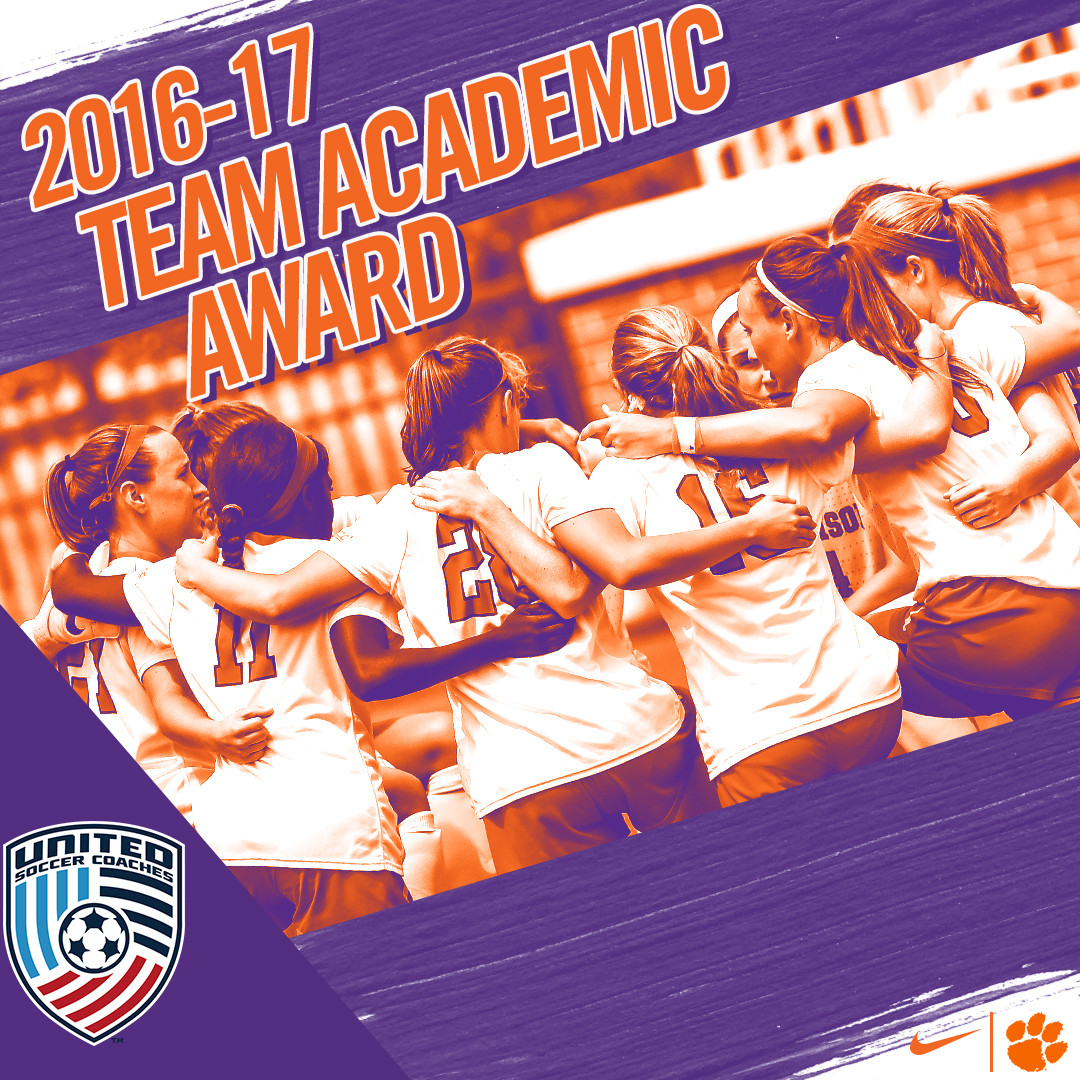 CLEMSON, S.C. – The Clemson women’s soccer team earned the Team Academic Award for the 2016-17 academic year, as announced by the United Soccer Coaches earlier this month. The Tigers garnered the academic accolade after recording a team grade point average above 3.0 (3.39 for 2016-17) for the academic year. The Clemson men’s soccer team was also recognized, the school is one of 210 programs to have both its men’s and women’s teams claim the award.

This marks the 13th time since 2002 that the Clemson women’s soccer team has received the recognition, and the eighth consecutive season since 2010, including all six seasons under Head Coach Eddie Radwanski. Radwanski’s teams have earned the Team Academic Award 15 consecutive seasons, as his UNC Greensboro program was recognized nine straight years prior to his arrival in TigerTown. That means that every year since the inception of the award in 2002, Radwanski’s teams have received the academic accolade.

The Tigers have achieved great success in the classroom under Radwanski. In addition to the six straight United Soccer Coaches Team Academic Awards, the women’s soccer program has claimed Clemson’s Team Academic Award, for the team with the highest cumulative team grade point average among all Clemson teams, in three semesters, the fall of 2013, spring of 2014 and the spring of 2016. For the 2013-14 academic year, the Tiger program posted a 3.67 cumulative team grade point average, which was the highest among all BCS schools for the academic year.

Individually under Radwanski, three Tigers have been named Academic All-Americans by CoSIDA four times in the past three years. Katelyn Reeve was a second-team selection in 2014, Jenna Weston was a second-team selection in 2016 and Emily Byorth was a two-time selection in 2015 and 2016, earning second-team status in 2015 and claiming a spot on the first team in 2016. Byorth and Reeve, as well as Gabby Byorth and Abby Jones were recipients of the ACC’s Weaver-James-Corrigan Postgraduate Scholarship under Radwanski, with the Byorth twins and Jones all garnering the award in 2017.

College Team Academic Award recipients are active members of the United Soccer Coaches College Services Program with a composite grade point of average of 3.0 or better on a 4.0 scale for all players on the roster. A total of 841 soccer teams (295 men, 546 women) posted a team grade point average of 3.0 or higher, thereby earning the United Soccer Coaches Team Academic Award for the 2016-17 academic year.