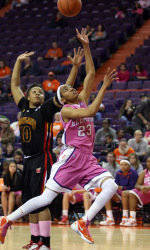 Clemson Drops Contest to No. 8 Maryland in Play4Kay Game

CLEMSON, SC – Clemson dropped a 91-61 decision to No. 8/8 Maryland (21-3, 8-3 ACC) in Littlejohn Coliseum on Thursday night. It was the Lady Tigers’ (6-16, 2-9 ACC) fourth game in the last five against ranked teams, and third against a top-ten opponent. Clemson played the game in pink uniforms, as the teams competed in the ACC’s first Play4Kay game of the season, in which schools do their part to help raise awareness for breast cancer. Activities throughout the night helped to perpetuate the cause, including a halftime dance by several breast cancer survivors and their children, a group of nearly 250 people. On the court, it was Maryland’s 11th straight win overall in the series, and gives them a 15-14 lead all-time at Clemson in the series. Three Clemson players finished the game in double-figures, led by Nikki Dixon’s 17 points (4-14 FG, 8-12 FT) in 33 minutes. Sophomore Chancie Dunn had 12 points (4-10 FG, 2-4 3FG, 2-2 FT), the second-best total of her career, in 24 minutes, while Kelly Gramlich scored in double-figures for the ninth time with 10 points. Clemson’s freshmen and sophomores combined for 57 of Clemson’s 61 points, inlcluding 38 from the freshman class. Deja Hawkins saw her first significant action in ACC play and didn’t disappoint, scoring eight points in seven minutes, while also stepping out and drilling a three-pointer. Clemson struggled with the Terps’ size, as they held a 39-33 rebounding edge, and scored 38 points in the paint, compared to just 16 for Clemson. Six Terrapins scored in double-figures in the win, led by Lynetta Kizer’s 18 points off the bench. Alicia DeVaughn caused issues in the paint for the Lady Tigers, as she posted 15 points on 5-7 shooting with a 5-5 mark from the line, while also tallying six blocks, four assists, and four steals from her center position. The Lady Tigers did an admirable job at getting to the charity stripe, hitting 20-27 (.741) in the game, the most attempts and makes in an ACC game this season. Dixon had a bulk of the attempts, going 8-12 from the line, the highest number of attempts for any Lady Tiger this season. Dixon also added four assists and two steals in her 33 minutes on the floor. Quinyotta Pettaway pulled down a game-high nine rebounds, including five on the offensive end, and finished with seven points. Maryland scored nine straight after Clemson had the opening bucket on a Pettaway lay-in, and extended the lead to 16-4 shortly thereafter. Maryland kept the pressure on throughout the first half, as Clemson turned the ball over 16 times in the frame. Clemson closed to six at 18-12 on a Dunn layup with 11:00 to go in the first half, but a 13-4 run pushed the lead out to 31-16 with just over five minutes to play in the half. Hawkins came in and nailed a pair of jumpers just before the half ended, but Maryland took a 46-26 lead into the break. Gramlich hit a quick three to cut the deficit to 17 ten seconds into the half, but Clemson could get no closer, despite scoring 35 points in the half overall and hitting 14-17 (.824) from the line in the second half. Clemson will travel to Charlottesville, VA to take on Virginia on Sunday, before heading north again to play Boston College in Chestnut Hill, MA on Thursday, Feb. 16.