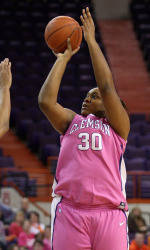 * Clemson made 20 free throws in 27 free throw attempts in tonight’s game, both season-highs against ACC opponents. That is most made free throws against an ACC opponent since January 30, 2011 against Virginia when they also made 20. Ironically, that was Clemson’s Pink Zone game supporting breast cancer awareness as well.

* Clemson’s bench players scored 25 of the teams 61 points in tonight’s game. That is the most points off the bench by the Lady Tigers against an ACC opponent since January 23, 2011 against Wake Forest.

* Clemson’s freshmen and sophomores combined for 57 of 61 total points, with 38 of those coming from the freshman class.

* Nikki Dixon tallied 17 points in tonight’s game. She now has 15 double-figure point games this season. She also attempted a career-high 12 free throws. She is now averaging 17.5 points over her last four games, during which she was named ACC Rookie of the Week twice.

* Chancie Dunn recorded a career-high in three-pointers made with two and three-pointers attempted with four. She also scored a season-high 12 points, the third double-figure point game of her career.