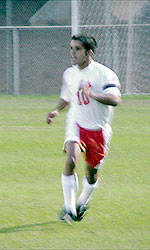 CLEMSON, SC – Fabio Tambosi and Oguchi Onyewu each scored two goals as the 11th-ranked Clemson men’s soccer team defeated Wofford College on Wednesday night at Historic Riggs Field. With their seventh win in a row, the Tigers improved their record to 8-2 on the season. For the match, the Tigers out shot the Terriers 24-2.

The Tigers struck first at the 9:32 mark of the first half when Kevin Conaway crossed a ball into the box for the sophomore Onyewu. Onyewu out-dualed a Terrier defender and headed the ball into the right hand corner the goal. The goal was the second of the season for Onyewu, a 2001 Hermann Award candidate. Conaway’s assist was his team leading sixth of the year. That mark is also tied for second best in the ACC.

Clemson’s final two goals of the half came off direct kicks from junior Fabio Tambosi at the 31:05 and 35:48 marks respectively. The goals were the first two of the season for Tambosi, who was playing in only his fifth game of the season after suffering an early season knee injury.

The first half ended with the score 3-0 and the Tigers holding a 16-1 shot advantage. The score remained 3-0 until Clemson struck again at the 80:45 mark of the second half when Oskar Bringsved crossed a ball to freshman Sean Rhynard who then played it in front of the goal for Onyewu. Onyewu’s quick shot beat the goalie for his second goal of the game.

The Tigers rounded out the scoring late in the game when Paul Souders was taken down in the Wofford box and Bringsved converted the penalty kick.

“I was not thrilled with the way we played tonight, but it was a win,” said Clemson Head Coach Trevor Adair. “Fabio and Oguchi really came out to play and both of them had some great goals. Wofford played hard and they had great pace and speed.”

The Tigers will next be in action on Saturday night when they travel to Charlottesville, VA to play undefeated and second-ranked Virginia in a match scheduled for 7:00PM.