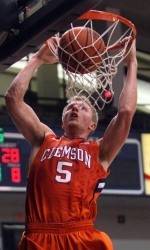 Clemson Downs The Citadel on the Road, 73-50

CHARLESTON, SC – Clemson used a stingy defense and held The Citadel to 30.2 percent field goal shooting Wednesday in a road win over the Bulldogs, 73-50. The game was the first played between the two schools at McAlister Field House since the 1989-90 season. The win was the Tigers’ 14th straight in the series, dating to 1978-79.

The Bulldogs didn’t fare well offensively against Clemson’s relentless defense. After shooting 8-for-26 in the first half, the Bulldogs shot even worse in the second half, 11-of-37. Clemson, conversely, shot 53.7 percent for the game, making 29-for-54 from the field. The Tigers were 4-of-9 from three and 11-for-22 from the free throw line. Clemson won the rebound battle, 40-38, and added 11 blocked shots and six steals.

Clemson had a balanced effort offensively. All 12 players on the roster played in the game, and 11 of them found the scoring column. Devin Booker led the way with 14 points, despite playing just four minutes in the opening half due to foul trouble. Tanner Smith added 11 points, all in the first half, and shot 5-of-7 overall. Charleston area native Milton Jennings was a third Tiger in double figures, scoring 10 points in 21 minutes of play.

The first half saw the Tigers get off to a strong start. Clemson led 7-3 early on behind a three from freshman Sapp. He followed minutes later with a pair of driving layups to extend the lead to eight. Smith pushed the lead to double figures for the first time when he scored on a layup and was fouled.

The Tigers played much of the first half without Booker, who was sidelined with two fouls. His counterpart in the post, Jennings, also picked up his second foul with just over five minutes left in the opening frame. Despite the foul trouble, reserve center Baciu converted a three-point play on the following possession to double up Clemson’s lead.

Smith provided some highlights in the first half. After a blocked shot by Bryan Narcisse, Sapp found Smith streaking for a perfect outlet pass and a fast break dunk. A few seconds later, Sapp stole a pass and again found Smith for a layup to push the lead to 32-18.

Smith finished the half strong, finding an open Andre Young for a three off a set out-of-bounds play. Moments later, Young stole a pass and returned the favor to hit Smith for another driving layup that made the score 39-20. Smith concluded the opening half with a game-high 11 points.

The Citadel opened the second stanza with five points on baskets by DeVontae Wright, but the Tigers answered with a pair of buckets by the junior Booker, who threw down a dunk at the 16:40 mark on a nifty bounce pass by Smith.

The Tiger defense was strong in the second frame, as Clemson held The Citadel without a point from the 18:12 mark until 9:53 remaining, a stretch of over eight minutes. The Tigers embarked on a 16-0 run during that stretch, with Booker contributing seven points by himself.

Brad Brownell pulled all his starters with 6:40 left in the game in favor of a lineup featuring four freshmen and Baciu. Forward Bernard Sullivan checked in and got on the glass, tipping in a shot to put the Tigers ahead 64-33. But after the Tigers yielded six points in a 90-second span, he inserted three starters back into the game at the final media timeout.

The Tigers return to action Saturday at home against the College of Charleston. The game will tip off at 7:00 PM in Littlejohn Coliseum and will be streamed live on ESPN3. The Clemson radio broadcast will begin with a pregame show at 6:30, and the network stations will join the game in progress following the conclusion of the Clemson vs. NC State postgame football show.