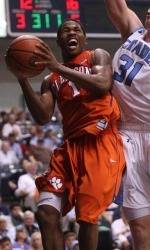 CHARLESTON, SC – With a little more than 16 minutes remaining in the first half Wednesday night, freshman T.J. Sapp took a jumper from the left side that hit the side of the iron and into the hands of a Citadel player.

On the way up the court, Clemson Head Coach Brad Brownell yelled to his new guard, “T.J.! Relax. Just relax and play your game.”

Sapp took his coach’s advice. From that point on as he went on to hit his next three shots, including two driving layups during a 12-2 run that gave the Tigers a 14-point lead they never relinquished in a 73-50 victory at McAlister Field House in Charleston, SC.

“I started relaxing after coach did that,” Sapp said. “This was my first road game as a college basketball player. I think I got caught up in the heat of the moment. Once I saw coach and he told me to relax, I could tell he had confidence in me.

“So I just calmed down and started playing my game.”

And what a game it was. In addition to his seven points, he also distributed two assists, both coming during the Tigers’ early run, including one to Smith, a length of the court pass, that the senior put away with a dunk. The pass was as good as any Clemson quarterback Tajh Boyd has thrown this season on the football field.

“The funny thing is, when I was younger I used to play quarterback. That was my position,” Sapp said. “The first thing I do when I get a rebound is look up the court. I saw Tanner streak out right away so I just knew I had to lead him.

“Once I led him, it landed right on the money for him. I don’t think he took a dribble. It was right into his lap. I didn’t even run down because I knew it was going to be good.”

Sapp did a lot of good things Wednesday. He also had six rebounds, all on the defensive end, as well as three steals. Again, considering his age, the most impressive statistic was his value of the basketball. Sapp finished with no turnovers and has just one in his first two games.

“T.J. did some good things,” Brownell said. “He made a (three-point) shot, got a steal and had a couple of nice passes in transition to a couple of guys. He is certainly further along than the other freshmen. That’s why he is playing. He has an opportunity to play with some older players, and they have put him in good positions.

“His energy level has been really good, and we are really pleased with what he has done.”

For Sapp, the more he is on the floor, the more comfortable he gets.

“I’m definitely getting more and more comfortable every time I’m on the court,” he said. “I try not to think about it too much. This is just another game. This is my sport right here, so I just try to go out and have fun.”

And that demeanor has been appreciated by his teammates.

“He played really well, especially on the defensive end,” Smith said. “Like I said last week, we are going to need that. We need as much help as we can get.

“T.J. is definitely learning a lot. He is picking things up quicker and the more he can do that, he is going to be a really good player for us.”