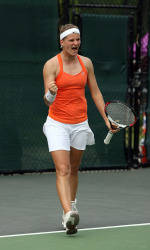 COLLEGE STATION, TX – The Clemson doubles team of Ina Hadziselimovic won their second round match at the NCAA Championships at the George P. Mitchell Tennis Center on the campus of Texas A&M University. By advancing to the elite eight of the national tournament, the Tigers earned All-America honors in doubles joining Ani Mijacika and Keri Wong to give Clemson a school-record four for the 2009 season.

Bek and Hadziselimovic defeated TCU’s tandem of Macall Harkins and Anna Sydorska on Fridayevening in straight sets. The Tiger duo eked out the Horned Frog players in the opening set and then edged them in the tiebreak. The two teams were then knotted at four games apiece in the second set before the Clemson team held on Bek’s serve. They then broke TCU to clinch the 6-4 victory.

Bek and Hadziselimovic improved to 17-7 on the year and will face Tennessee’s team of Natalie Pluskota and Caitline Whoriskey in the round of eight. The Volunteer duo knocked off second-seeded Kristy Frilling and Kelcy Tefft of Notre Dame on Thursday in straight sets.

The two teams will battle for a trip to the semifinals on Saturday at 11:00 am Eastern Time. Live stats and a video broadcast of the match will be available by accessing www.aggieathletics.com.

Bek, a rookie from Osijek, Croatia, has now earned All-America status in both singles and doubles for the 2009 season. She is only the second freshman and just the fifth different player in school history to advance in both the national singles and doubles tournaments in the same year, joining an impressive list that includes Ani Mijacika (2008) and Carol Salge (2008).The award is the first for the junior Hadziselimovic.

However, her run in the singles tournament ended on Friday afternoon as Bek fell to third-seeded Aurelija Miseviciute of Arkansas in the round of 16. Bek and Miseviciute were tied at three games in the first set but the Razorback player held serve twice and broke Bek in between to post the 6-3 victory. Miseviciute then took an early 4-1 lead in the second set before Bek rallied to win three straight games, breaking Miseviciute’s serve twice to knot the set at 4-4. She was unable to continue the run and fell, 6-4, to end her impressive freshman campaign with a 34-10 record.