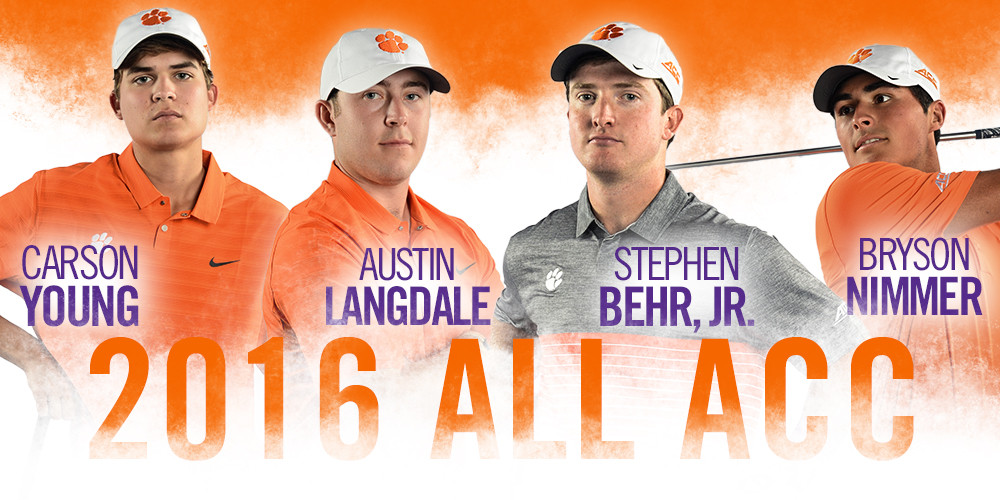 Clemson, S.C.—Austin Langdale, Stephen Behr, Carson Young and Bryson Nimmer were all named to the 12-man All-ACC golf team on Thursday.  Additionally, Nimmer was named the ACC Freshman of the Year. Clemson, who won the ACC championship in April, had the most selections with four, while Florida State and Virginia had two apiece.

The four selections were the most for the Clemson program since 2003 when the Tigers won the National Championship.  The only other season Clemson had four selections was 2000 when future PGA Tour players D.J. Trahan, Jonathan Byrd, John Engler and Lucas Glover all made the team.

Clemson now has 77 first-team All-ACC selections in its history, more than any other school.  The Tigers moved ahead of Wake Forest, who has 75.

Langdale leads Clemson in stroke average with a 71.70 average and is the highest rated Clemson player according to Golfweek with a No. 23 national ranking.  He has four top 10 finishes, including a fourth place at the ACC Tournament.

Behr, the winner of the Byron Nelson Award from the College Golf Coaches Association, is second on the team in stroke average at 71.80 and is the highest ranked Clemson player according to Golfstat with a No. 34 national ranking.  He also has four top 10 finishes, including a second-place at the Carpet Classic last fall.

Nimmer is third on the team in stroke average at 72.33, on pace to be the second best by a Clemson freshman.  He has three top 10 finishes in six events, including a fourth place at the ACC Tournament.  Nimmer is he third Clemson player to win ACC Freshman of the Year honors, joining D.J. Trahan (2000) and Kyle Stanley (2007).

Nimmer’s father, Tony Nimmer, was first-team All-ACC at Clemson in 1981 and was a starter on Clemson’s first ACC Championship team in 1982.  With Bryson’s selection, this is the first father-son All-ACC combination in Clemson golf history.

Young is a junior from Pendleton, S.C. who has a 72.78 stroke average.  He is ranked No. 69 in the nation by Golfstat and has seven rounds in the 60s to tie for the team lead, and has three top 10 finishes.  He was Clemson’s top player in the final round of the ACC Championship with a 68.

Clemson begins play in the NCAA Regional tournament at Stillwater, Okla. on Monday. The top five teams from that 14-team regional move on to the NCAA Championship tournament in Eugene, Ore. on May 27.  Clemson is the No. 2 seed at the Stillwater Regional and is ranked in the top seven in the nation by all three major college golf rankings.