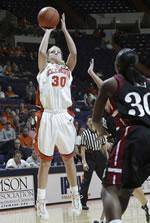 With the win Clemson is now 4-1 overall, while Western Carolina drops to 1-4. Yoneko Allen led the Catamounts in scoring with 16 points. In the first half, Clemson jumped to a 12-3 with 15:40 left, as Julie Talley hit a three point shot. The Lady Tigers continued to hold the lead had a 23-11 advantage midway in the first half. Clemson maintained at least a 10 point lead for the remainder of the first half. The Lady Tigers had their largest lead of the half, 41-27 with 25 seconds remaining as Whitehurst hit a three point shot from the left wing.

The Lady Tigers built a 53-36 lead with 14:28 left to go in the game as Yoneko Allen hit two three point field goals in the rally.

Clemson scored the next five points and had a 60-52 lead with 9:03 left. Maggie Slosser hit a field goal and the free throw for the three-point play.

Western Carolina scored the next five points and again came within three 60-57 with 7:08 left. The Lady Tigers went on an 11-5 run and took a 71:62 lead with 4:16 on the clock. Slosser had four points in this Clemson rally.

“Julie Aderhold played with a lot of poise tonight,” said Clemson Head Coach Jim Davis. “Carrie Whitehurst did a great job shooting the ball. I think we had a courageous performance. Give Western Carolina a lot of credit. They are much improved and they outscaped us in the second half. We took the fight to them in the first half and played passive in the second half.”