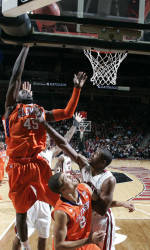 CLEMSON, S.C. (AP) – After watching his team pull out to a 21-point lead at halftime, Clemson coach Brad Brownell heaped praise upon his players in the locker room.

He may not do that again anytime soon.

Winless North-Carolina Greensboro stormed back to twice cut the lead to two points before the Tigers regained control for a 71-61 victory Sunday.

“Obviously, killing them with kindness is not something they responded to,” Brownell said. “We had a chance to really step on them.”

Andre Young scored 22 points, including a pair of 3-pointers down the stretch, and handed out five assists for the Tigers (7-4), who pulled away with a late 15-2 run. Jerai Grant added 19 points, 13 rebounds and five of the Tigers’ nine blocks.

Korey Van Dussen hit 7 of 10 shots, including 3 of 4 from 3-point range, to lead the Spartans (0-10) with 20 points. Trevis Simpson added 16 as UNC Greensboro fell by double digits for the ninth time.

The Spartans, outscored 24-4 at the end of the first half, began the second half on a 7-0 run with a dunk from Simpson and five points from Van Dussen.

Simpson’s 3-pointer with 9:08 left pulled UNC Greensboro to within 49-47. But Clemson’s Tanner answered with a 3-pointer from the corner.

The Spartans never had a possession in the second half with a chance to tie or take the lead. Following Grant’s three-point play, Xavier Anderson drove the length of the floor for a layup. Young followed with a 3-pointer then Smith drove baseline for a dunk.

“We made three, four, five good plays down the stretch on offense,” Brownell said. “We did show some poise there.”

“We’ve got to work on finishing games,” said Young, who scored 13 of his points, including three of his four 3-pointers in the second half when UNC Greensboro double-teamed Clemson forwards down low.

With fellow guard and leading scorer Demontez Stitt out with an injury, Young said he’s tried to pick up some of the slack.

“I think I’m one of our best offensive players and when I get an opportunity I want to take advantage of it,” Young said.

With Grant dominating the middle and a stifling defense creating 11 turnovers, the Tigers grabbed the comfortable halftime lead.

UNC Greensboro’s offense loosened up with more transition opportunities in the second half.

“If we played the same way in the first half that we played in the second half, it definitely would have been an interesting game,” said Spartans coach Mike Dement.

“They were really getting it into our guards and making it hard to get the ball inside. Their defense was great in that first half.”