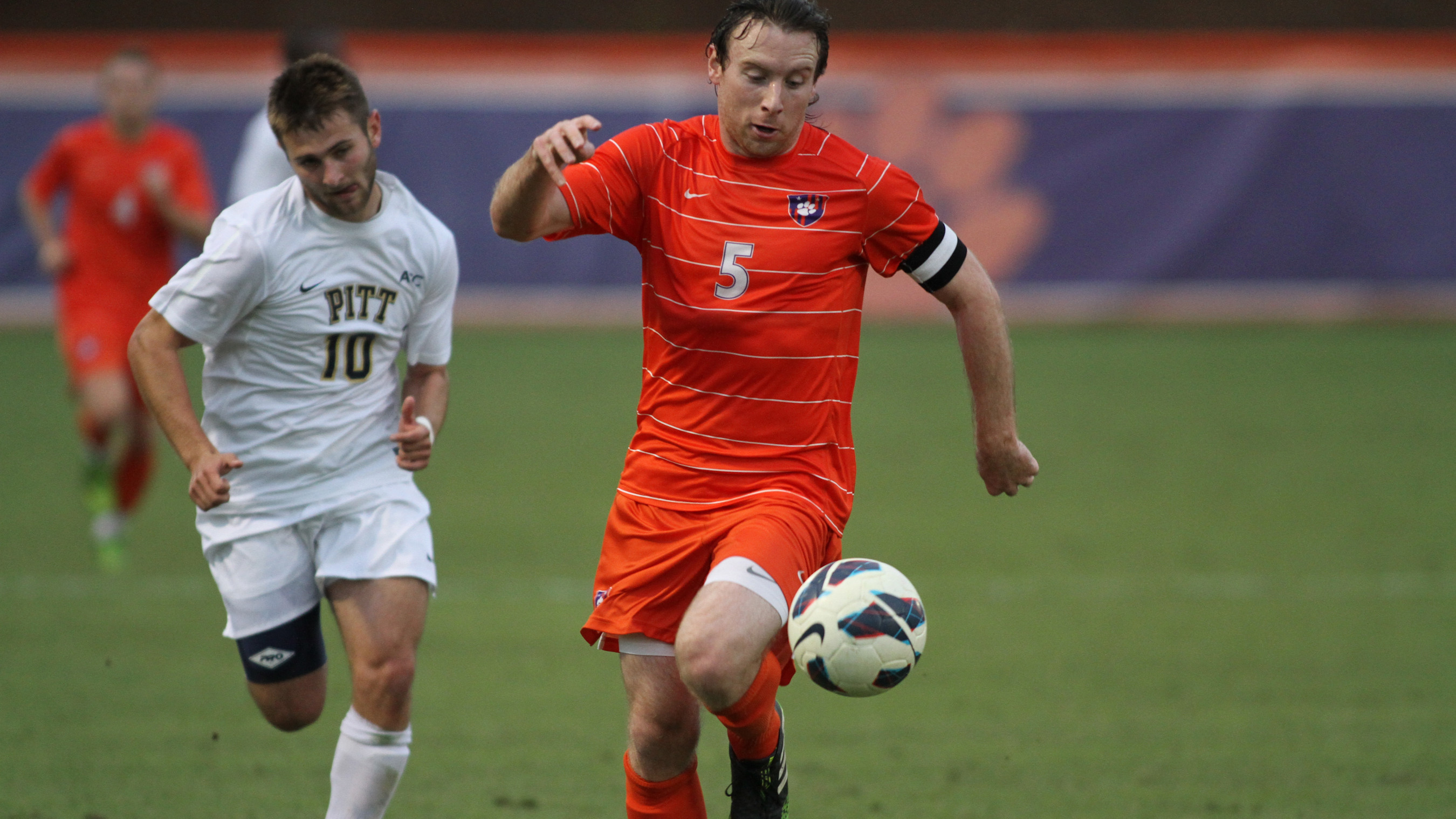 CLEMSON, SC – Alex Stockinger and Thomas McNamara both scored goals in leading ninth-ranked Clemson to a 2-0 win over Pittsburgh in an Atlantic Coast Conference men’s soccer match at Clemson, SC Friday night.  With the win, Clemson improves to 9-3-2 overall, 4-2-2 in the ACC.  Pittsburgh falls to 0-8-4 overall and 0-6-2 in league play. In the 14th minute of play, Pittsburgh had a good chance to score.  On a penalty kick, Nico Wrobel attempted a penalty kick, but he sent the ball high and the match remained scoreless. Clemson had its first opportunity to score as Alexandre Happi had a shot on goal but it was saved by Pittsburgh goal keeper Dan Lynd. In the 19th minute of play Bobby Belair sent a shot to the frame, but the attempt was saved by Lynd.  Thomas McNamara had two shots on goal late in the first half, but they too were saved by Lynd. Clemson’s Jack Metcalf fed the ball to Manolo Sanchez on the right.  Sanchez was driving inside the box and was tackled by Pittsburgh defender Kevin Fielden and a penalty kick was awarded to the Tigers. Stockinger scored on a penalty kick late in the first half at the 42nd minute of play.  It was his first goal of the season.  Stockinger sent the ball to the left corner to give the Tigers a 1-0 lead. Right before the half, Clemson had another scoring opportunity as McNamara sent a free kick in the box to the Tigers’ Kyle Fisher.  Fisher headed the ball toward the goal, but it was saved by Lynd. McNamara scored in the 52nd minute of play to give the Tigers a 2-0 advantage.  This was his seventh goal of the season.  TJ Casner assisted on the play. Pittsburgh’s Romeo Charron sent a curving free kick from the left side of the box near the right post.  However Clemson’s goalkeeper Chris Glodack grabbed the ball in the air to make the save. With 20 minutes remaining, the Tigers’ Alexandre Happi sent a shot from 12 yards out that hit the left post, but the ball was cleared before another shot could be made by Clemson.Clemson’s last serious scoring opportunity came with less than seven minutes remaining in regulation.  Happi sent a shot toward the goal but Lynd was there to make the save. For the match, Clemson took 23 shots compared to Pittsburgh’s four.  Pittsburgh had five corner kicks and Clemson had four.  Pittsburgh’s goalkeeper had seven saves and Chris Glodack of Clemson made three. “Pittsburgh was a tough team and they were hard to break down,” said Clemson Head Coach Mike Noonan.  “We need to be more clinical in front of the goal and in the final third.  TJ Casner came in and picked us up tonight.   I was glad that Stockinger was successful on the penalty kick, and had the confidence to take charge and put it in the goal.  It was a good team win.  We can still improve in certain areas.  We took another step in the right direction tonight.” Clemson will play at Charlotte on Tuesday in the Tigers’ next action.Scoring Summary: Clemson – Alex Stockinger (Penalty Kick) 41:54 Clemson – Thomas McNamara (TJ Casner) 51:39 Shots:  Clemson 23, Pittsburgh 4 Corner Kicks:  Clemson 4, Pittsburgh 5 Saves:  Chris Glodack (CU) 3, Dan Lynd (P) 7 Fouls:  Clemson 12, Pittsburgh 22 Attendance:  2,726