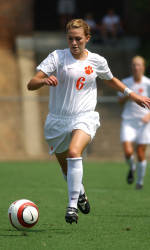 CLEMSON, SC – Molly Franklin scored the game’s lone goal with only 25 seconds into the first overtime period in leading Clemson to a 1-0 win over N.C. State in an Atlantic Coast Conference women’s soccer match at Clemson, SC Sunday afternoon.

Meghan Smith crossed the ball from the left. Fraser Gerth flicked the ball back to Franklin who sent an eight-yard shot to the back of the net with 25 seconds gone in the first overtime period (90:25).

“It’s a big relief in getting the result,” said Clemson Head Coach Todd Bramble. “There were many reasons we could have used in not playing well, but our team responded and we played a great game. I thought that Katie Vogel, Lindsey Jackson, and Elizabeth Jobe played well today. There were two tired teams out there today at the end, and I’m so happy that we found a way to win. We showed a lot of character and we played hard today.”

It was Franklin’s fifth goal of the season. Clemson has now won four straight games in a row, all of these victories have come against conference teams.

Clemson will play at Florida State on Friday, October 27 at Tallahassee, FL in the Lady Tigers’ last match before the ACC Tournament in Cary N.C. on November 1-5.