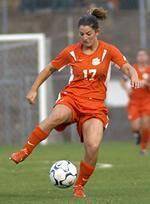 Foster now has four goals on the year, three in the last two games. Allison Grahm now has nine assists on the season. After a scoreless first half, both teams went to work in the second. Within the first 46 seconds, the Tigers posted the first goal of the match.

Foster collected a rebound off the right post after Allison Graham struck from the right side about 10 yards from the 18-yard box corner. Schneider crossed in from the left side to the center of the box and headed it in the net.

With Clemson up 2-0, the Wolfpack scored at the 60:36 mark. Kasie Shover’s free kick, just off the center of the half circle, hit the crossbar. Lydia McBath was there on the left side to put the ball into the bottom left corner of the net.

Three minutes later, Clemson’s Foster scored her second goal of the match, again with some help from Graham. Graham dribbled down the left sideline and passed off to Foster who was inside the box, about 12 yards out in the center.

“I am very pleased with the way we played in the second half,” said Clemson Head Coach Todd Bramble. “We played with more urgency and stepped up in the second half and that was the difference in the match. I am very pleased in the direction our team is heading. This was a big win for us on the road. We knew it was a matter of time before Courtney Foster starting scoring goals. She is playing with a lot of confidence in front of the goal and that is really helping our team.”