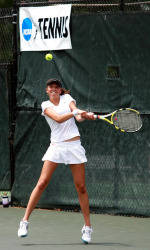 Clemson Defeats Michigan; Advances to Round of 16 in NCAA Tournament

Two top-20 teams, Clemson and Michigan, met in the second round of the NCAA Women’s Tennis Tournament on Saturday afternoon, with Clemson grinding out a 4-1 victory. The Tigers advance to Tulsa, OK for the round of 16 and will play the winner of the Texas A&M and Stanford matchup on Thursday.

Clemson jumped on the board first, winning the doubles point. Ina Hadziselimovic and Alexandra Luc started off the run, defeating Michigan’s Lindsey Howard and Denise Muresan 8-5. The Tigers clinched the point when the nation’s fourth-ranked tandem of Ani Mijacika and Carol Salge downed the 40th-ranked duo Tania Mahtani and Chisako Sugiyama, 8-5.

Mijacika, the second-ranked player in the nation defeated 50th ranked Sugiyama 6-0, 6-4 to put the Tigers ahead 2-0. The win was her 17th this season against a ranked opponent, improving her overall mark to 28-6.

Wolverine Rika Tatsuno then downed Clemson’s Federica van Adrichem 6-1, 6-2 to cut the Tigers lead in half. Estefania Balda, ranked #113 in the nation, defeated Whitney Taney at flight two 6-3, 6-3 to bring the Tigers within one point of advancing at 3-1. Freshman Laurianne Henry, playing at flight six, won her match over Lindsey Howard, 6-1, 6-7, 6-2 to clinch the match for the Tigers.

The match was much tighter than the score indicated, as the other two matchups were very close in the third set. Clemson will advance to the round of 16 for the fourth time in five seasons. Clemson is now 9-1 all-time in home regional matches.