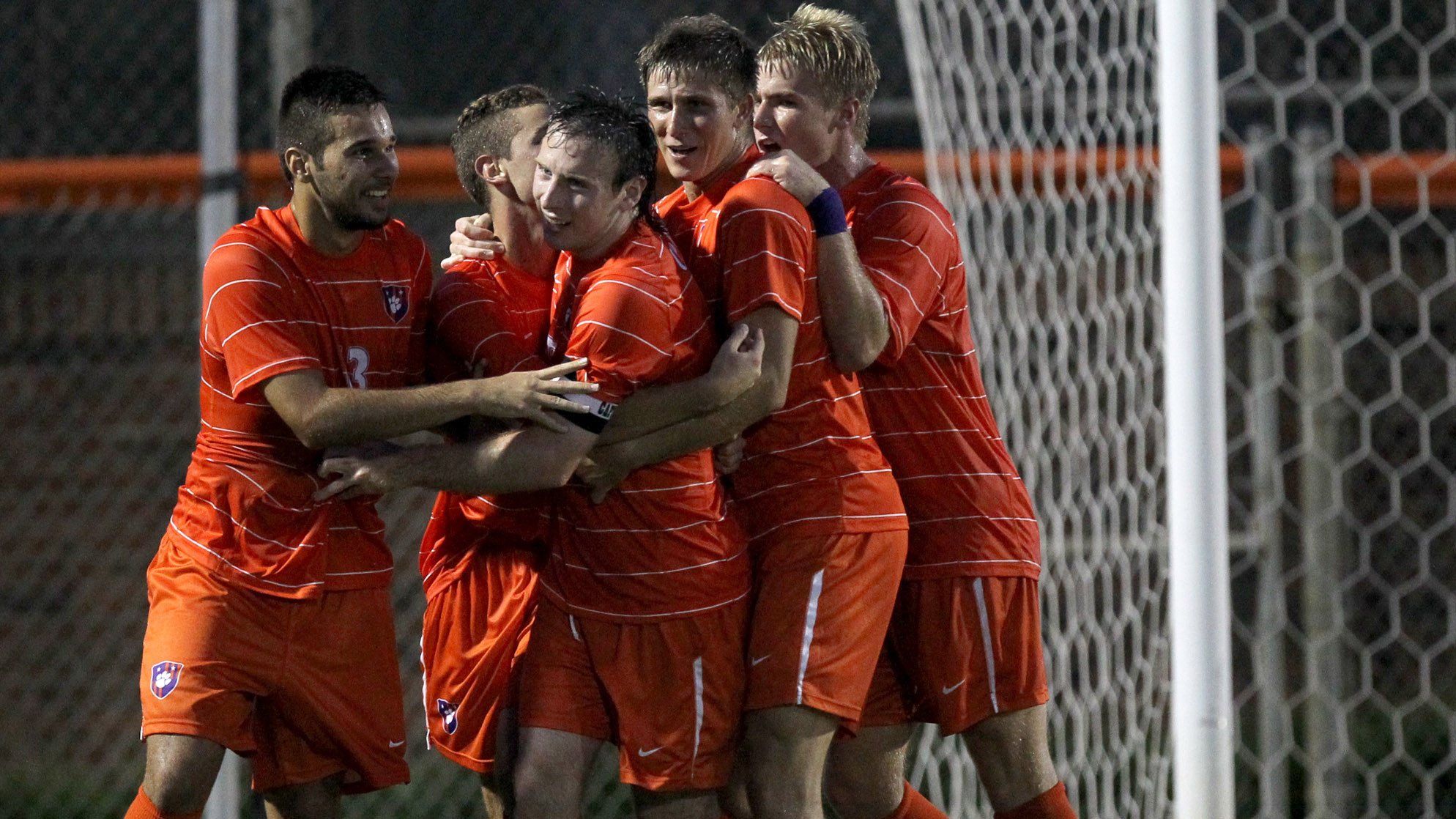 CLEMSON, SC – Thomas McNamara scored one goal and assisted on the other in leading Clemson to a 2-0 victory over Mercer at Clemson, SC Friday night.  It was the season opener for both teams.  The crowd of 6,223 on hand was the seventh largest crowd to witness a soccer match at Historic Riggs Field.

Clemson dominated play to start the game.  In the first half, Clemson took eight shots compared to Mercer’s two.  The Tigers also had five corner kicks in the first 45 minutes of the contest.

Six minutes in to the match, Clemson came close to scoring.  Jack Metcalf fired a shot from 16 yards out from the right, but it was saved by the Bears’ Greg Ranjitsingh.  However, his save came out to his right and Ara Amirkhanian’s shot went just wide of the left post.  Clemson kept the pressure on in the first half and scored with 3:53 left before intermission.

On Clemson’s first goal, Bobby Belair sent a ball to the right to Paul Clowes.  He then crossed the ball to McNamara who sent a shot from six yards out into the netting for his first Clemson goal.  McNamara is a graduate student at Clemson having graduated from Brown last December.

“It was great to get the result,” said McNamara.  “We had a huge crowd and they were in the game with us.  It was awesome having this large crowd, I’ve never been part of anything like this.  We will build on this result, and continue to work hard,” said McNamara.

The Tigers scored their second goal at the beginning of the second half with only 2:59 elapsed.  Ara Amirkhanian stole the ball and sent it to McNamara in the middle.  McNamara played the ball through to Sanchez who scored on a diagonal shot from 15 yards out to give the Tigers a 2-0 advantage.

“We scored two very nice goals tonight,” said Clemson Head Coach Mike Noonan, who is in his fourth year at Clemson.  “We have to play hard for 90 minutes.  I thought after we scored the second goal, we took our foot off the gas.  I was disappointed with that, and concerned, as that was the first time we have done that this year.

“We created chances tonight and we didn’t concede any goals and that was great to see.  We will now prepare for South Carolina.  The match with South Carolina is always a big match, and we want our fans to come out and support us on Labor Day night.

“It was a great atmosphere tonight,” said Noonan.  “I would like to thank our fans for creating a wonderful atmosphere for us.”

Clemson will play South Carolina on Monday night at 7:00 p.m. at Historic Riggs Field in the Tigers’ next action.